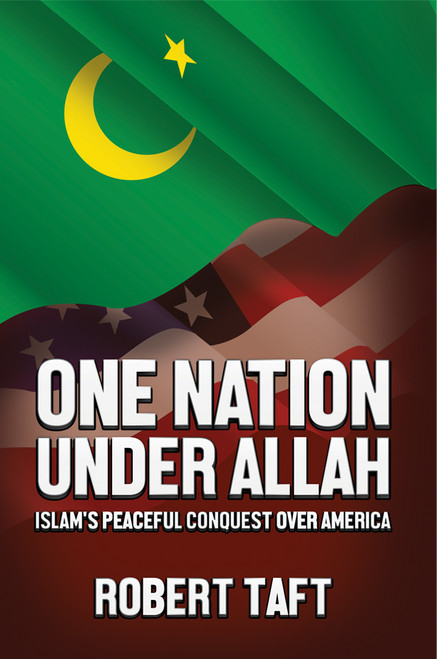 One Nation Under Allah: Islams Peaceful Conquest over America
by Robert Taft

"Robert Taft has written an excellent book. The author’s premise that Europe is in a predicament,
and so is America could not be more timely." - Jonathan Matusitz

Ever wonder what Muslims worldwide really think about America?

This fast-paced docu-novel treats Islam like never before and tells us exactly what Muslims think. It traces the global creep of the religion and how, why and about when it will consume America. Based on facts, current and future demographics, and the experiences and conversations the author has had with Muslims globally, it chronicles the Islam creep from the time of Mohammed to 2030.

Post 9-11, George Anderson visits the Prophet Mohammed at three stages in the Prophet's life during which Islam evolved from a peaceful to a violent religion. The imaginings pit Mohammeds ever-changing reasoning against Western ideology.

From there the story documents the endless war between Muslims and Christians and Jews, prompting George to seek out an influential imam who explains why America will eventually convert to Islam.

The book lays out the imams vision in what George believes will really happen the transition in the United States, global developments that further pressure this transition, the collapse of Europe, the election of the first declared U.S. Muslim president and the creation of many Muslim towns in America. Phase 2 presents an idyllic Muslim town and the stark reality behind it leading to the novels shocking conclusion.

Robert Taft has worked and travelled in nearly 80 countries. He was involved in negotiations between Israel and Egypt after their skirmish in the early 1980s. He was a consultant for several Middle Eastern and African governments.