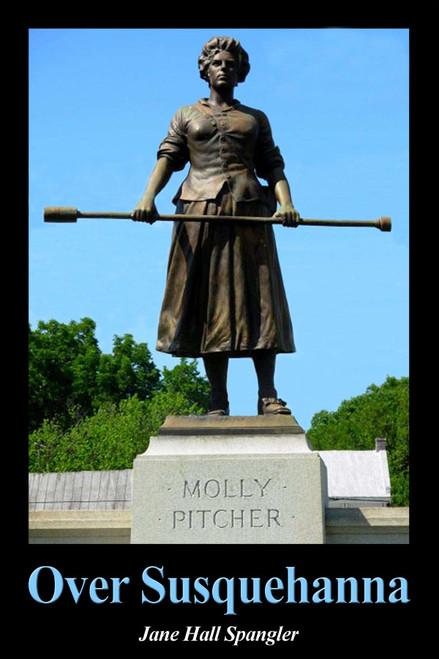 Over Susquehanna
by Jane Spangler

Many Americans are familiar with the story of Molly Pitcher, or Mary Ludwig Hays, who became famous when she stepped up and operated her husband's cannon after he was injured in the Battle of Monmouth in New Jersey during the Revolutionary War. Few are aware, however, of the many other Revolutionary War generals and high-ranking officers from Molly's hometown of Carlisle, PA. In fact, General William Irvine and four of the five fighting Butler brothers were with her at Monmouth on that day in June 1778.

Spanning the 50 years from the French and Indian War to the early 19th century, this novel also highlights historic events in western Pennsylvania (including Braddock's defeat, the Whiskey Rebellion, and the taking of Fort Duquesne from the French) and Lancaster County, where the lives of several families (such as Slough, Gibson, and Cope) intersected with notable natives of Carlisle, PA.

Jane Hall Spangler is a retired newspaper reporter, editor, and columnist. She spent more than three decades researching and writing Over Susquehanna. A graduate of Rutgers University's Douglass College, she is also the author of a history of the Presbyterian Church of Bound Brook, NJ, the town that was her home for eighty-plus years.

Two of Mrs. Spangler's ancestors are included in Over Susquehanna as minor characters: Dereck Sutphen, whose farm was part of the Monmouth battleground, and his son-in-law, the Reverend Jacob Van Arsdale, whose Presbyterian church in Springfield, NJ, was burned by the British.

Out of This World: Another Noah's Ark?

Pages of a Young Boy

Out of the Jungle 6th Edition