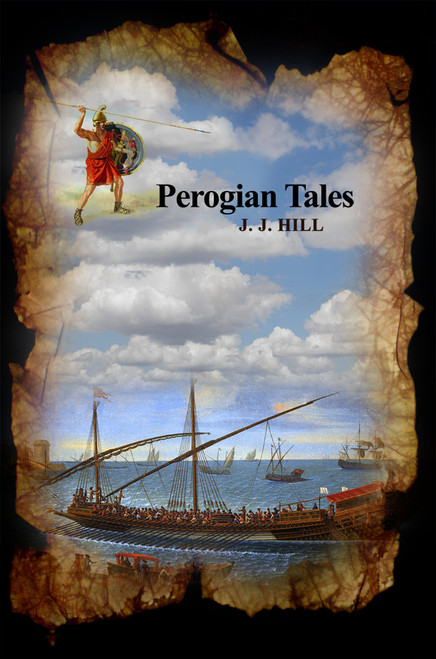 Before ancient Greece and Rome came to the world stage, there existed - separated by a slender inlet - the mighty kingdoms of Perogia and Loraikain.

After a brief and successful first posting at Perogias largest Regal Garrison, a young, gifted, mounted-warrior officer named Booker Strong ends up being called to lead his fellow warriors to victory in the far-away land of Zoordain. Booker has a one-of-a-kind ability on horseback and an undefeatable character.

With the introduction of Granton Ozborn and Erik Pell, the former, a heavily-muscled, but intelligent giant-of-a-man; the latter, an obnoxious and short shipping magnate; we come to intimately know two of Perogias most powerful characters, who were once allies but fall into acrimony and become arch-enemies as the story unfolds.

Ronka Pell, Eriks only son, is bright, fun-loving and gifted physically, but is also spoiled by his father. He and Booker are best friends; Ronka is both a compelling and integral figure in Perogian Tales.

We also examine a potential love interest of Bookers, a Miss Julia Hope. To describe her as an exotic and gorgeous blonde would not do her justice, as she parlays her natural beauty into a dressmaking business and boldly maneuvers her way through a male-dominated world with an ease and style that defies her youth and uniquely identifies her.

Through these characters, the reader gains an insight into their ancient world. The author strives to make the point that the passions we claim as uniquely ours have, in fact, been around for a long, long time.

J. J. Hill was a normal thirty-five year-old accountant until an auto accident almost ended his life in December of 1991. Due to the brain trauma he endured in the accident, he spent a month and a half in a coma and then eight and a half more months in the hospital. As a lasting result, he is a paraplegic who is pretty much confined to a wheelchair.

Since his left hand was unaffected, Hill is able to use it to write. Fast forward four and a half years and he began this book.

For, Hill writing makes him an artist His mind is his palette, words are his paint and his word processor is the canvas.