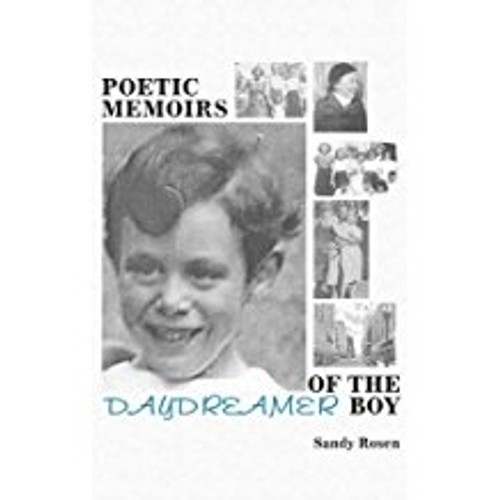 by Sandy Rosen This book of poems is autobiographical, assembled to recapture specific periods out of the past. Each poem is a vignette covering a small slice of daily life in the boys early years. The poems speak to the timeframe of 1937 through 1957 and reveal real life in a relatively small Jewish neighborhood on the North Side of Minneapolis, Minnesota. The poems are very personal to the boy and bring real insight to the times before digital everything came along. The poems give the reader a feeling of looking through the wrong end of a telescope into another persons early life, a period of Americana that has been presented up close through inaccurate fiction way too often. The poems expose the universality of a young boys feelings of simultaneous insignificance and grandiosity and offer insights into the way people make choices by avoiding choice at all costs. The poems start with the boys first recollections and follow his life through the first twenty years. Each poem is one page in length, and there are pictures of people and objects from the period interspersed throughout the book. ABOUT THE AUTHOR A true Gemini, Sandy Rosen lives in two different worlds. One world is business, computers, government, and all things very proper and conservative. The other world is tied to live theater, acting, and directing from California to New York. As a young daydreamer, he found it hard to study, pay attention, or focus on anything but music. He became a professional singer, actor, and director. His wife, Sara, is also a professional actor and writer. Together they founded the Minneapolis Repertory Theater. At the same time, he became a computer industry pioneer, building the first totally integrated computerized financial reporting system, working with IBM, and designing the first database-driven online documentation system. As a result of his work in the computer industry, he was involved in the management of three different public computer system companies during the seventies and eighties. He left the corporate environment to become an independent consultant and advisor to a wide cross-section of business, city governments, and the arts. He spent a number of years in New York, adding to his education and experiences in both computer sciences and live theater. He now lives in San Francisco with his wife, Sara, and is close to his three sons and three grandchildren. (2007, paperback, 218 pages) Availability: Usually ships in 2-3 business days.

Poetic Words of a Passionate God

Poetic Visions through the State of Mind