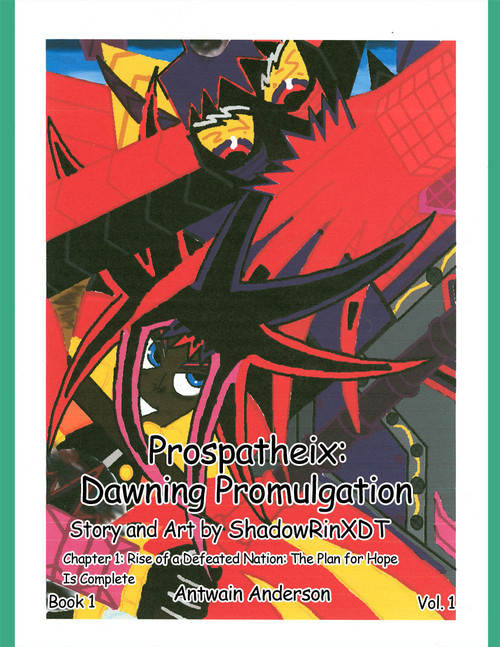 Prospatheix is a unique comic book. It sends the message of how far extreme desperation will drive some and how to never give up hope no matter how dire the situation.

Rashad Hideaki creates a metallic, spandex armored suit which allows him to be the hero Prospatheix for King Galax and Queen Galaxia for the planet of Galaxinus. After a dying request from his late Queen Prospatheia, he takes on protecting the Trimazi Nebula. He faces off against the vengeful Cassadorian Empire whose sole purpose is to conquer the Trimazi Nebula and other universes.

This comic will show readers and those who aspire to be writers and artists to not be afraid of controversy. Do not underestimate or ignore controversy. Create a story with an unpredictable twist.

Antwain Anderson is an aspiring comic book writer and artist. His DeviantArt name is ShadowRinXDT. He has always had a passion for drawing and creative storytelling. While growing up, Anderson was considered a geek, loving cartoons, superheroes, and video games, and loved drawing his favorite characters such as Spongebob Squarepants, Spider-Man, Spyro the Dragon, and Crash Bandicoot. His main inspiration, however, came from his love of anime and manga, like Yu Yu Hakusho, Dragonball Z, and, his favorite, Attack on Titan.

Antwain currently lives in Palmdale, California, and dreams of traveling the world and inspiring other comic book writers.