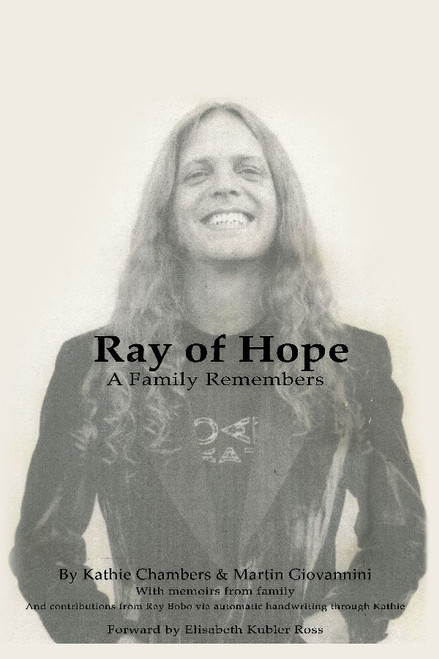 Ray of Hope
by Kathie Chambers and Martin Giovannini

What you are about to read is testimony from a family and a testament to family.
Ray of Hope: A Family Remembers is about family, hope, and, at its heart, a love story between mother and son.
After Kathies son Raymond, the middle of five children, died of melanoma cancer at the age of thirty-six, she was devastated. Shortly after, Ray began communicating with her through automatic handwritingan uneasy transition for some but a natural one for Kathie, a seasoned teacher of meditation and metaphysics.
Through his automatic handwriting, Ray often spoke of his joyous life on the other side"studying, traveling many universes, using his ability to be in multiple places simultaneouslybut mostly he spoke of his love of and communication with his family.
Ray of Hope: A Family Remembers is also about a parent and a family coping with the loss of a loved one and their unique way of grieving, according to their belief systems and support networks.
Rays hopeful message that life continues after death encourages us to know, appreciate, and celebrate family. Because life transcends our existence in this world and extends beyond our senses, we can continue to connect, communicate, and carry on our relationships. And, as Ray says, It is wonderful!

Martin Giovannini lives in the Salem, Oregon area where he conducts child welfare mediation, teaches photography, and has a private practice as a fine art photographer. He recently became an empty nester, having raised two wonderful children: his daughter, Maresa, who is a freelance writer and magazine editor, and his son, Alex, who is a nuclear engineer in the Navy.
Marty enjoys the outdoors, culinary arts, reading, and writing. He is the author of several books regarding his photography and poetry. Marty also believes in being active in his local community, especially through volunteering.
This book exemplifies his belief in strong family ties and the cosmic resonance and transcendence of life.
Kathie Chambers is a mother of five children and four step-children. After becoming a widow and single mom at an early age, she raised her five children on her own until she remarried in 1970 to Bill Chambers who became an instant, loving father to more children (and now have ten wonderful grandchildren). They lived in the Lake Tahoe area for 36 years and currently reside in the Carson Valley.
Kathie has studied and taught meditation and metaphysics for over forty years. She has the "joyous ability and gift" to "see" on the other side and relay joyful messages from those who have passed over.

Ramblings: An Insight into Human Demeanor

Reality vs. the Era

Ready or Not, Here It Comes! (Preparing You and You Companion Animals for Possible Disasters)

Ravings of a "Lunatic"?