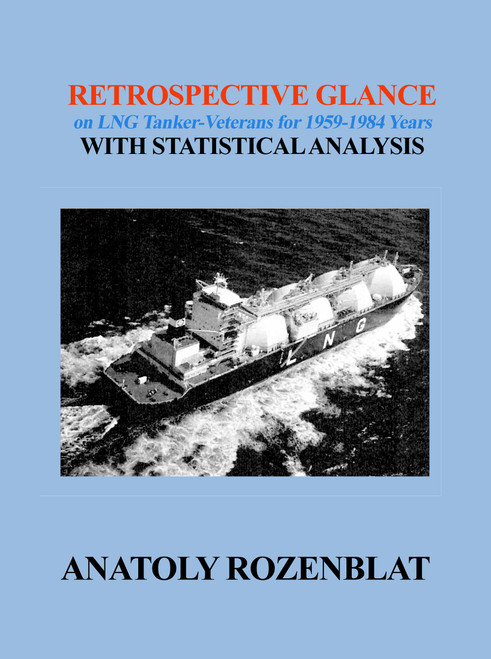 The purpose of this book to celebrate the SIXTIETH ANNIVERSARY IN USA of the beginning of transportation of the Liquefied Natural Gas (LNG) by sea with using the first gas-carrier Methane Pioneer on January 25,1959, which made her first voyage for USA to United Kingdom where the LNG was delivered.

•chapter one: discovery of general ship’s characteristics of 84 LNG Tanker-Veterans and shows of some containment systems;

Rozenblat came to the United States in 1990 with status of refugee. As a creative personality, inventor and scientist, he received a fundamental technical and arts education in Marine and Manufacturing Engineering. He also participated in the US SBA Program (NASA, Energy, etc.) and was also invited on 26th, 27th, 28th and 29th Israel Conferences on Mechanical Engineering.

Rozenblat’s biography has been published in IBC (England) in 24 Ed. 1996; International Who’s Who Intellectuals, 12 Ed, 1997; Outstanding Scientists of the 20th Century, 1999; and also in ABC (USA); Marquis Who’s Who in America, 54th Ed, 2000. Rozenblat possesses 25 published books and 30 innovations. He lives in Chicago with his wife. Rozenblat lives in Chicago and is the father of two adult children, Moshe and Inna

Rooster's Day on the Farm - eBook

Rhymes of an Adolescent - eBook

Rise Above It All

Rise Above It All - eBook