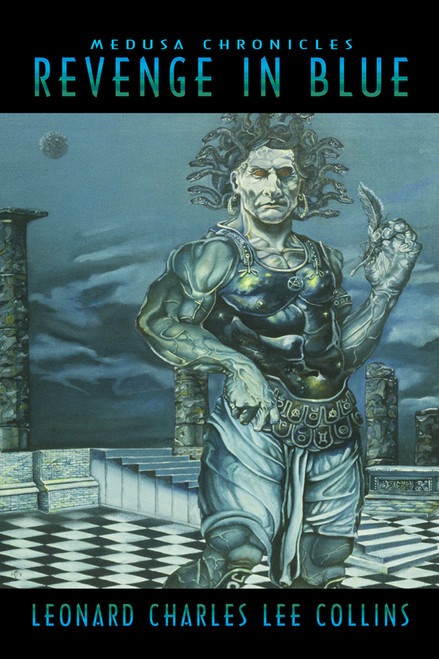 Revenge In Blue is the tragic story of Tauriansett and his quest for vengeance. It is a look at the history of mankind, a history tainted with hate. It is the story of Tauriansett, who is cursed by the gods of Olympus. He returns home to learn that his twin sister, Medusa, has been savagely murdered by an invader called Perseus.

It is thus that the stage is set. Along with his dear friend Mars, the god of war, and several village warriors, Tauriansett vows that his people will no longer live in fear of being hunted and their remains becoming trophy hangings.

This work is an attempt to examine the "truths" of "his-story." It is a look at the troubled relationships between man and man, man and God, and man within himself. Through the lives of the characters depicted, we see how they struggle with negative and positive relationships. It is thorough this external process, the eyes of others, that hopefully we too can deal openly and honestly with our fears, suspicions, and prejudices as related to the diversity amongst us.

Leonard L.C. Collins is currently the Executive Director at the Cleveland Treatment Center. He is an alumnus of Benedictine High School in Cleveland, Ohio (The Home of Champions) and a proud member of the Bengal Nation. After serving as a member of the Army Reserve as a Medic and as an Instructor, he attended Cleveland Institute of Art/Case Western Reserve School of Medicine in Medical Illustration.

He is the founder of the City of Clevelands Health Departments Program for teens, Just Chillin and the co-founder, with Dr. Victoria Cargill (National Institute of Health HIV/AIDS Research), of the Stopping AIDS is My Mission Program, which was sponsored by the University Hospitals of Cleveland. He hosted the Just Chillin with L.C. radio and TV programs that are broadcast on 91.1 FM and CLV TV 35 in Cleveland for 18 years. He also served as Chairman for the Mayors Youth Violence Councils Youth Committee during the mayoral administration of George Voinovich and Michael White, facilitating the development of a systems approach to address urban violence and safety.

One of the main programs of CTCs Prevention Department is the Hooked on Fishing, Not on Drugs/Passport to Fishing program, which is co-sponsored by the Ohio Division of Wildlife and the Future Fisherman Foundation and has received state and national recognition as a Best Practice model for aquatic education, ATOD/Violence prevention and early intervention programming. Cleveland Treatment Center is recognized as Ohios first urban Hooked on Fishing, Not on Drugs program.

When not fishing , L.C. finds time to present urban violence, cultural diversity, and empowerment trainings throughout the country. As a freelance medical illustrator, other consumers of L.C.s artwork have included the City of Cleveland, medical institutions, lawyers, national celebrities and authors. He was one of the dozen artists selected by the Cultural Art Committee of the 1996 Summer Olympics.

Finally, he is the Varsity Boys and Girls Head Track & Field Coach at Cleveland Central Catholic. The Iron Men Program has made great strides and is enjoying success in the State Tournament, with hopes to capture a state title. L.C. is also the author of Reflections Sweet and Sour, a cultural study that utilizes creative writing to examine the value and views of teens.

Rise Above It All - eBook