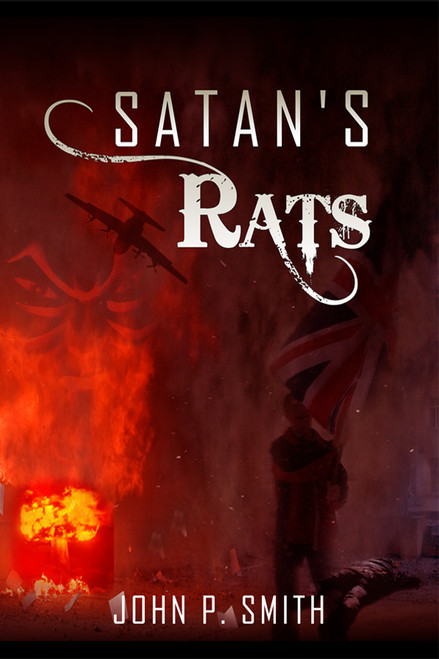 Satans Rats is about evil, Satan, and evil overcoming good - or maybe good overcoming evil. It is the story of struggling author Sam Hall, who is downtrodden by the British way of life, by the British existence.

World War III was approaching, but not fast enough. It was well behind schedule. So to speed up the approach, new authority was specified to him, who, up till now, was the deceiver of man. Now his authority had been extended to include vermin. The mischievous sprite had learnt that the way to converse with rats was by ultrasound vocalization. This was a new tool, a new weapon, God had handed to the devil, or Satan. Or the deceiver of man. Or the mischievous sprite. They were all one of the same.

Evil rats being led by Satan generate mass death and destruction all over the world, perhaps ushering in the end of the world as we know it.

Will Sam Hall prove to be just a downtrodden British pervert trying his hardest to always do the right thing? Or will this cover keep the pervert in Sam Hall hidden?

I was born in Colchester Essex in the UK. The year was 1956. I am currently married to my long-suffering wife, Teresa. We were both blessed with the birth of our only daughter, Donna, in 1986. We now all live with boss of the house, Leo, a two-year-old Yorkshire terrier.

I have seen nearly all Seven Wonders of the World. However, I have never seen a sight more magnificent than that of the sight, of the curvature, of Barbara Brownings naked breasts.

One of my many hobbies, which I never seem to get enough time to pursue, is reading all kinds of horror stories. My favorite author is Stephen King. I also enjoy playing Snooker and listening to Johnny Cash music. And if I happen to have a few days to spare, nothing beats bobbing up and down on the ocean waves. Its so restful, so peaceful. I get some of my best ideas with the sea air blowing in my face.

A Bridge Over Satan's Ravine - eBook

Scars of a Calabash Misdeed

Saved by the Light

Say, Whose Country Is This Anyway?