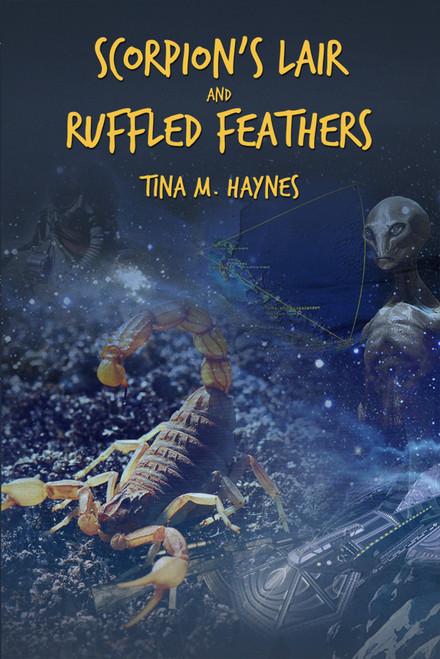 Scorpions Lair the daughter of a former leader in a black market empire is called upon to dust off her talents and deal with a member who is all too willing to sing to the FBI. Reluctantly, she and a former beau from THE UNDERGROUND mange to interrupt the transpiration of the agent to a federal courthouse.

The result wasnt anything the prey or predators came to expect at the end of their mission.Ruffled Feathers a test pilot shockingly discovers the enigma behind the Bermuda Triangle. Much to his horror, he discovers that, not only is he not alone in his victimization, but the big picture will come to endanger the entire universe.

Caught up in the surrounding danger, he must mange to survive not only his present situation, but also help events unfold to protect the very future of life itself.

Author Tina M. Haynes has always had an interest in writing. One of her earliest works was an animal adventure story, written just before she started kindergarten.

Tinas other interests include astronomy, history, and obscure ancient sites. She found time to scribble out numerous yarns in the chilly weather of upstate New York. Now, after years of struggle, two of these stories are now in print. One, Scorpios Lair, is an adventure story within a crime family. The other, Ruffled Feathers, tells a science fiction tale.

Scratch Paper: Ramblings of a Man Out of His Mind

Scars of a Calabash Misdeed

Scars of a Lunatic