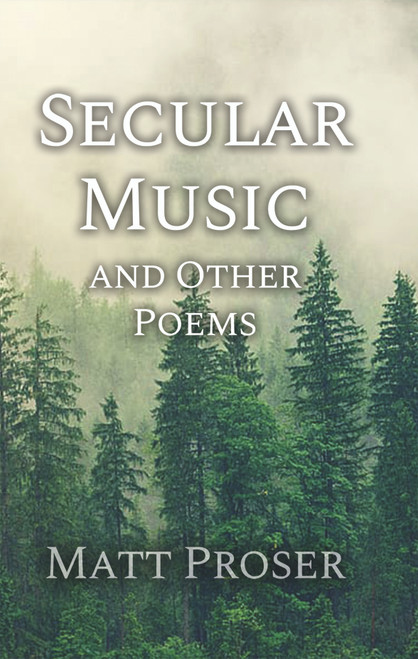 Poet Matt Proser finds his poetic identity in nature and locality. He expresses himself through descriptive details of localities such as the Outer Banks in North Carolina, Seattle, Connecticut, or in various places in Argentina. For Proser, an engagement with place is a new engagement with life, and travel is adventure, trial, and rebirth, but underneath these runs the pulse of nature and the instinctive self that guides his language. Proser’s poems are attempts to release the primitive energy hidden within us; energy associated with the pleasure or pain that exists in human relationships such as love, marriage, friendship, or even social being, and their opposite, death. Thus, language is the staff that leads us from the outer world of civilized communication to the intense world of illogical feeling, the residue of our primitive past. In so doing, his poetry at times engages myth, the basis of all art, and music, the voice of the inexpressible. Secular Music encompasses a particular segment of Proser’s life during which he attempted disentangle the world with words that reached into the meaning of the human experiences he was having.

Matt Proser is retired from the University of Connecticut, where he taught Shakespeare and other English literature courses. Previously, he taught at the University of Washington and Penn State University. He was born in Brooklyn, N.Y. and made his first trip to Europe when he was twenty. He graduated from N.Y.U. magna cum laude, phi beta kappa, and took his graduate degree in English literature at the University of Washington, where he where he met his late Argentine wife. They had two children and travelled together extensively in Europe and South America. He has written books on Shakespeare and Christopher Marlowe, is an amateur photographer, and has taken piano lessons since the age of seven. He now resides in Salt Lake City, UT.

We Are In This Together!: Our Weaknesses Identified - eBook