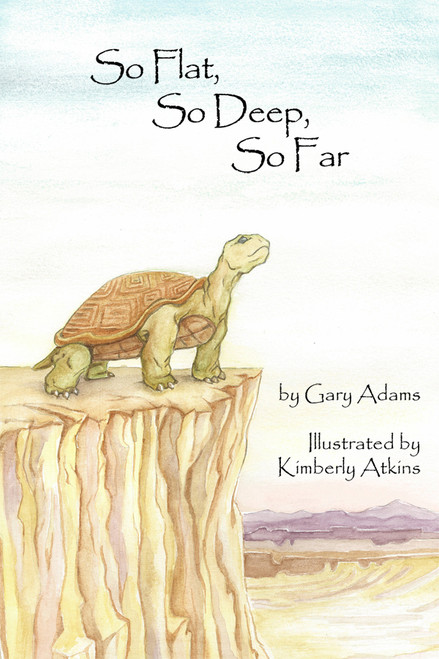 So Flat, So Deep, So Far
by Gary Adams
Illustrated by Kimberly Atkins

This fictional story is one of a broad appeal, telling of a host of desert animals, their lives, travails and ultimate friendships. While they manage together the situation of a man in their midst, the dramatic and sudden need of one of their friends in the desert brings them together in another common cause - and the real hero will be a surprise!

Gary Adams received his masters degree from UCLA in l964 and has written several childrens books, including The Ladybug Story and So Flat, So Deep, So Far.

His initial interest in writing childrens stories began by telling his five daughters bedtime stories as they were growing up. From those stories, The Little Clock With No Hands was born.

Gary Adams may be unique among most writers, as most of his seventy years was spent either playing baseball or coaching baseball. Gary was the captain of the UCLA baseball team, for whom he played from l959 to l962.

Afterwards, he became a college baseball coach, coaching for forty-one years (thirty years as the head baseball coach at UCLA). He retired in 2004 as the winningest coach in UCLA history with l, l72 wins. He coached forty-four major league players while at UCLA (second most in collegiate baseball history), and he was inducted into the prestigious NCAA Baseball Hall of Fame in 2004.

Gary lives with his wife, Sandy, on a small ranch in Bear Valley Springs, California, where he manages his own small vineyard.

Kimberly Atkins attended Otis Parsons Art Institute in Los Angeles, California. She is the authors daughter, one of five daughters who listened to her fathers bed-time stories as she was growing up.

Kimberly has captured the essence and vitality of each character and the territories in her superb water color paintings for So Flat, So Deep, So Far.

She is married to Dan Atkins and lives in Newbury Park, California with their two children, Mason and Rachel.

Slowly Unwinding or Rag Doll: Life Can Be Fun After 80 by Alease Allen Thomas