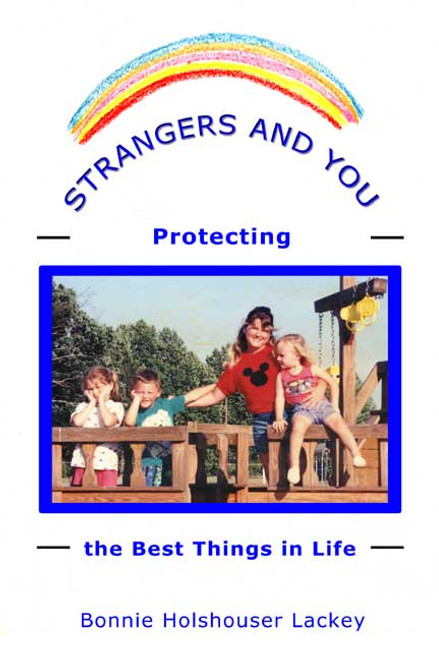 by Bonnie Holshouser Lackey In 1974, Bonnie Holshouser Lackeys twins were born. A few years later, she heard about a little boy named Adam Walsh disappearing from a Florida mall. He was the same age as her children. She became so distraught that someone could commit such evil against a child, the incident stayed on her mind for many years. There have been numerous children kidnapped since, as when five-year-old Brittany Locklear disappeared from her bus stop. As parents, we need to educate our children. We need to talk as a family so our children know they do not need to be passive and that they can be heard. Strangers and You illustrates to children some important ways they can help to protect themselves, using visuals readily understood by children, and easily used by Mom and Dad. Ms. Lackey writes not to scare children, but to show them how to react to strangers and how they can be safe both inside and outside the home. ABOUT THE AUTHOR With four children of her own, Bonnie Holshouser Lackey has always been adamant about the safety of children. She has a background in law enforcement: In 1997 she became a deputy sheriff. Before that, she spent years as a park ranger. It seems she has lived the role of protector all of her life. (2005, paperback, 44 pages) Availability: Usually ships in 2-3 business days.
×

All you need every day of your life!