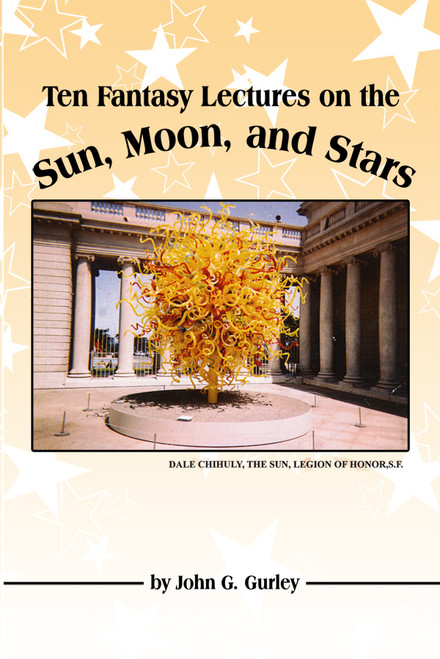 Ten Fantasy Lectures on the Sun, Moon, and Stars
by John Gurley

These are lectures on astronomy that John Gurley imagined giving at his retirement home near Stanford University. He had to imagine them because the august Lecture Committee at the retirement home denied him the opportunity to speak. If one cannot give a simple lecture at a retirement home, one has definitely fallen into the pit of pits.

Okay, no speak, then all write. So Gurley began writing out his fantasy lectures, pretending at times that he was as much of an imposter or clown as the Lecture Committee apparently thought. While the lectures are, perforce, in a farcical setting, the astronomy is always serious. Gurley hopes that the fancy, the farce, and the real in these lectures are blended just right to give readers as much pleasure as educationa ha-ha with an aha!

John Gurley seemingly has no right to write about astronomy. Why should an economics Ph.D. from Stanford University help to qualify this guy to scan the sky? Yes, sure enough, he taught all that economy stuff, to some acclaim, at Princeton and Maryland, and back to Stanford, the same; however, a professor doesnt need a telescope withal to teach the economyonly a crystal ball. But dont you think that managing editor of the American Economic Review would prepare him for astronomy, too? No? Well, pause a bit and Nota Bene, hes been retired for a quarter century. Give the old prof a break, for heavens sake. With all those years free of economic gobbledygook, he should be able to master astronomy to some degree without a masters degree in astronomy. See? Have a look!

A World of Fantasy and Disaster