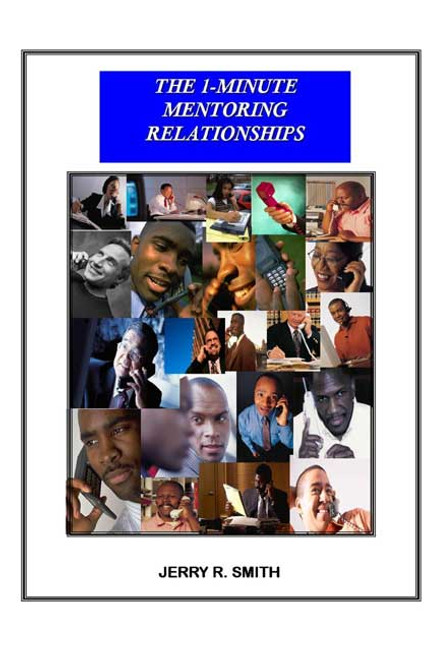 by Jerry R. Smith I am Mr. Mentor, Jerry R. Smith, cofounder of a youth organization, Kidz For A Better Society (KFABS). I mentor for UNLVs mentoring program; I am past co-chair of the mentoring committee Chairman of the Education Committee and past member of the National Education Board for the mentoring organization The 100 Black Men of Las Vegas and of America. Black men giving back to the Black Community! Now let me answer the question, What is the 1-minute mentoring relationship concept? It is simply the philosophy of an adult helping the inner-city youth improve their present and future lives with very brief encounters in just about 1-minute at a time. The concept for the book and the desire to teach this method of mentoring came to me as I worked with my youth organization Kidz For A Better Society (KFABS) in Las Vegas. Though KFABS taught music industry job skills, I found the kidz faced some tough challenges and had more and more questions about life skills in general. Id take about a minute or two to address some of these questions, and theyd be on their way. It was just a short minute, that was it. ABOUT THE AUTHOR First-born to Charlie and Rosie M. Smith
Born in Arkansas
Chosen leader for the family
Graduated in 1974 in a class of 13 students
Joined the Air Force in 1974
After finishing Tech. School in Illinois, he was stationed in Columbus, Ohio (74-76), Germany (76-78), then to Las Vegas, where he separated service in 1981
Moved family from Arkansas in 1979 to Las Vegas
Partners with Hurtem Bad Mobil Disco Company
Married and has daughter in college
Corrections Officer Las Vegas Metro Police, 1985
Degree in Business Management, 90 from UNLV
Instructor and trainer for Las Vegas Metro Police
Trained mediator for the Neighborhood Justice Center
Volunteer for United Way of Southern Nevada
Past-president with TNT Toastmasters Henderson, NV, 2001
Co-founder of Kidz for A Better Society, non-profit youth organization, 1992
Business owner, Psmyth Ent., Inc., 1990
Loves to travel, read, write, mentor, create
Co-chair Mentoring Committee for 100 Black Men of America, Las Vegas Chapter, 2001
Motivational speaker
Leader of a nine-member rock band with his brothers
Stand-up comedian
Artist/painter
Model
President for JFJ Million Dollar Investment Club
Record producer, TJher Productions, Inc.
Concert promoter (2007, paperback, 74 pages) Availability: Usually ships in 2-3 business days.
×

I Love You Every Minute