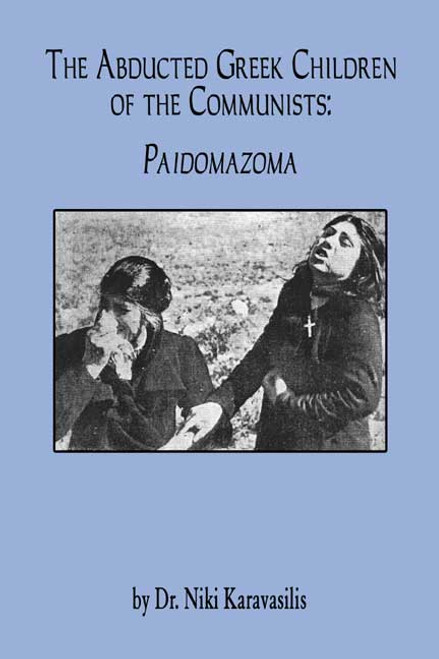 by Dr. Niki Karavasilis The Abducted Greek Children of the Communists: Paidomazoma is a true and emotional story about the 28,000 children who were abducted by the Greek Communist rebels during the Greek Civil War from 1946 to 1949 and were scattered behind the Iron Curtain. It is the devastating story of a twelve-year-old abducted girl, Dora, her struggles, horror, and loneliness in Yugoslavia. Her fate was to spend thirty-three years behind the Iron Curtain, away from her widowed mother, who lived in Greece. Doras life encompasses the sufferings of the thousands of the abducted children who lived as refugees in an unknown world of starvation and deprivation dipped into Communism. It is the story of Maro, Doras mother, who never stopped searching for her daughter until her last breath of air. She spent years of disappointment with the end result not to see her daughter again. Maros struggles are as extensive as Doras two human beings trying to be reunited but never reaching their goal. This book offers a glimpse of the many layers of the abducted childrens sufferings. The author follows the historical and political synopsis with a glimpse into Doras life that brings the historical reference to life. This provides the reader with a framework that promotes understanding of her struggles. The story is heartbreaking but uplifting. It is one of triumph and tragedy. It is one that follows a young, innocent girl through the depths of hell behind the Iron Curtain and sees her out the other side, returning to Greece in her late sixties. ABOUT THE AUTHOR Dr. Niki Karavasilis, a professor of foreign languages, was born in Greece and educated in the United States. Fluent in many languages, she taught for thirty-five years at high school and college levels in Athens, Greece, and at several universities in New England. She was founder of the workshops in New Hampshire: In Search of Excellence in Teaching Foreign Languages. A member of numerous honor societies, she was selected for Whos Who in America and Whos Who in the East for her outstanding achievements in the teaching profession. She was commended for her efforts in promoting the study of foreign languages by the Council General of Spain in Boston, Andres Drake, and also received an honorable letter from President Reagan for helping high school students. Dr. Niki Karavasilis is also the author of Scattered leaves, which is about the many Greek families who suffered during the devastation of the Italian and German invasions and Civil War of 1946 to 1949. She retired in 1995 and now resides in New Hampshire with her husband and spends her summers doing her research in Greece. (2006, paperback, 254 pages) Availability: Usually ships in 2-3 business days.
×

The Adventure of Huff and Puff