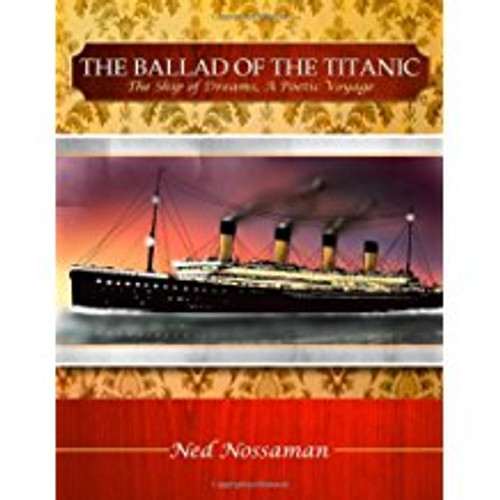 The Ballad of the Titanic: The Ship of Dreams, A Poetic Voyage
by Ned Nossaman

Theres a question poised, unanswered, deep in human hearts today; it lingers still to contemplate, regardless what we say. Just why had God allowed this? Well, the answers, two they be; one rests secure in heaven, while one lies beneath the sea

Most men of weight and substance, should they probe the thing at all, they realize prides appointed to precede a dreadful fall; no human is invincible, though some had let it slip, not even God himself could ever sink the mighty ship.

There is quite possibly no other historical event in the last century as compelling and ironic as the tragic tale of the proud sailing and ultimate sinking of the RMS Titanic. In April of 1912, she departed in glory, and never returned. She became known as The Ship of Dreams, and was thought by many to be virtually unsinkableyet,

In the centurys adventures oer the vast mysterious deep,
the Titanic had a dreadful date with destiny to keep...

The author has faithfully researched much of the available history, and committed the entire journey and demise of that great ship to classic, and easily readable verse. Without question, she, and her historic voyage are worthy of such an epic, literary remembrance . Rich imagery and tragic irony are the themes of this classic narrative.

greatest maritime disaster in all peace-time history...
she descended two-and-one-half miles to the bottom of the sea.

The only son of a Hollywood writer and an off-Broadway actress, Ned spent his early years in New York City where his childhood was a blur. Educated in the South, he holds a Masters degree in Education. Married on the island of Gibraltar to his college sweetheart, he and his editor/wife, Mary Ellen, speak fluent Spanish and have lived and traveled in many parts of the world. They have six children, and some of those children have children of their own. The author currently resides in Brea, California, where he has taught almost every level of school, from 3rd grade through Advanced English and Creative Writing to post-graduate students at California State University, Fullerton, for the last six years. Ned gives most of his free time to composing adult and childrens verse and speaking at different venues. He is published in the field of Multiple Intelligences (under the pseudonym Edward Clarke)

Something in us almost magically responds to poetry if it is the right poetry. It brings to mind things which can hardly be imagined. It has its own music. It reaches inside us and touches the deep and noble elements of the soul, which cannot be merely achieved by simple narrative.
~ Mary Ellen Whyte, Editor

The Astro-Bible According to John: OR God's Creation of the Universe OR The Whole Shebang Without the Big Bang