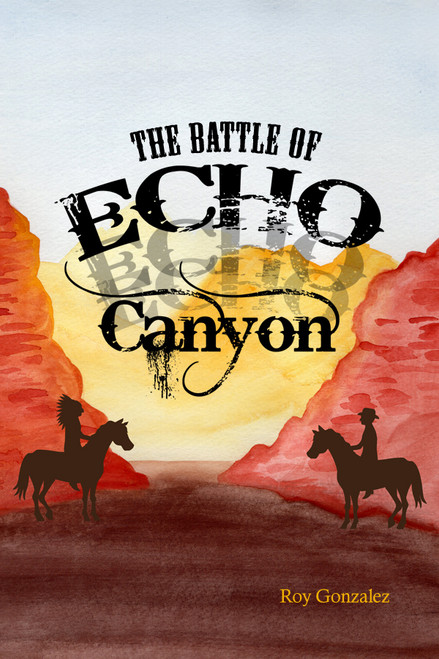 The Battle of Echo Canyon
by Roy Gonzalez

In the turbulent years of the settling of the West, two great leaders are destined to meet in what is the most unique, unconventional battle of the old West. Indian Chief Eagle Beak, the great leader of a large band of Indians, crosses paths with the equally great well-known wagon train master, Chaseum Younger. Thus, the Battle of Echo Canyon is the inevitable outcome with many humorous actions taking place as the action continues.

The Indians, trying vainly to save their territory, confront the wagon train settlers who are determined to do whatever it takes to reach their far away destination, California. Along with the settlers traveling to California are ten very lovely young women stars of stage and song and their equally lovely and young woman friend. As fate would have it, their presence proves to be very essential on the long trip and to the outcome of the battle.

As the totally unpredictable, wacky encounters between the Indians and the Settlers continue, the convoluted manner of people, places, and things propels the saga to its very mysterious, exciting conclusion.

Roy Gonzalez was born in Detroit, Michigan, and presently lives in Taylor, Michigan. A retired toolmaker, he is active in a variety of organizations which include veteran and military groups and environmental organizations. Additionally, he aids in cleaning up the park in the Detroit neighborhood where he played as a youngster and plays outdoor hockey in the same park. His hobbies include hockey, baseball, writing, and dancing. He is presently enjoying all of them.