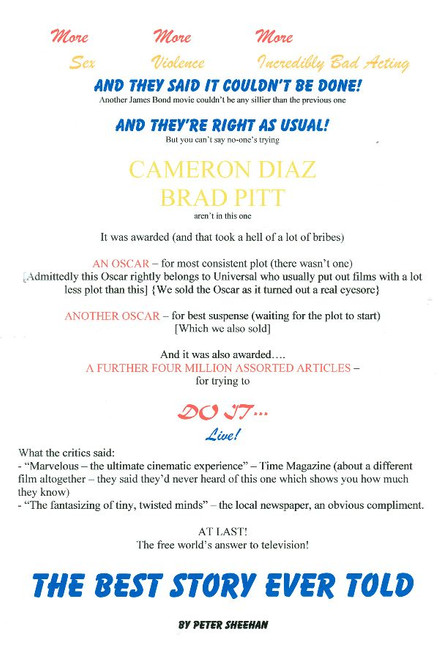 THE BEST STORY EVER TOLD
by Peter Sheehan

Bigger than
The Bible, The Koran, and Even
The Other Book of Pooh!

Blamed for global warming, promiscuity in teenagers, economic meltdown, nearly turning Allah straight, and what happened to the dinosaurs.

Free economic advice its worthless, of course
Expand your vocabulary without getting arrested
Improve your animal husbandry skills
Enhance your negotiation skills with hitherto unpublished abuse
(all from watching television)

Finally revealed, the answer to the question that has plagued human beings down through the ages. Now you can find out who didnt shoot John F. Kennedy.

Peter Sheehan was born on 9th December, 1955, in Sydney, Australia. He was one of the first people anywhere to be completely raised by a television. He and his family spent three years watching a bunch of chimps until someone realized they had to turn the television on.

Peter is the author of The cynics Trekking Guides, such as Drunk and Disorderly in the Dardanelles, Insensible in India, Comatose in Canada, Non Compos Mentis in Mongolia, Bored Titless in Arabia, and Cant Remember California, as well as the definitive phrase book, Getting Your Face Slapped in 123 Languages on 5 Continents.

Pimp in Distress: The Untold Story of a Pimp of This Pimp Life Style

A Migrant in America: Stories that Must Be Told