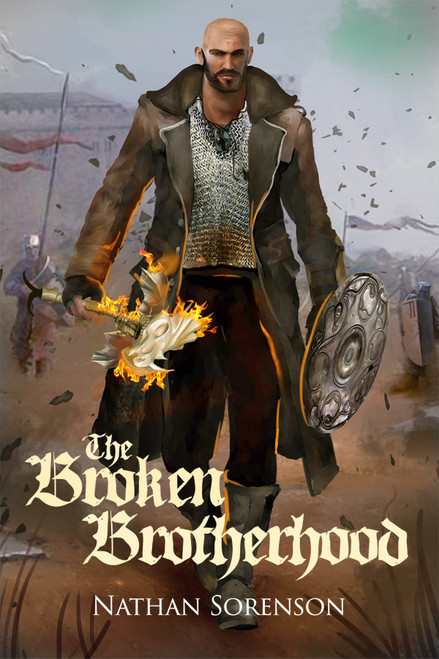 Meet a man broken by life. Every time he scratches and claws his way to the top someone or something knocks him down. Meet Zelus at a time where he has given up and has decided to stop playing life by the rules. He has put his trust in laws and powers set by the kingdoms of Terabithia over and over again, and somehow he finds himself as a slave riding in a caravan in the desert to a life of poverty and backbreaking work.

However, as soon as Zelus makes the decision to stop following the rules he is confronted by a new chance: something he has wanted since he was a child. It’s every young man’s dream to become a knight. This opportunity is thrust upon him. Follow Zelus and his friends as he struggles through the rigorous training required by the Jaborian knights, also known as the Broken Brotherhood. Over a decade ago the Brotherhood, who at the time had been the most elite military forces in the thirteen kingdoms, had been almost completely destroyed and has struggled to rebuild its ranks. For the first time ever the knighthood has been open to anyone, no matter their heritage. Zelus struggles to maintain his military barring and races against his past, while at the same time trying to control the darkness inside of him.

Being born of dark blood, Zelus struggles everyday to control the demonic powers within. If anyone were to find out, he would be dismissed from the Brotherhood. Thieves, murderers, and rapists are welcome to change their lives in the Brotherhood, but someone cursed with bark blood would be refused instantly. Unpredictable and dangerous, any individual with dark blood would never be allowed in any military force with a sense of morality.

Nathan Sorenson grew up in a small town in Missouri. He was homeschooled and graduated at the age of sixteen. He is a U.S. Army veteran and a scoutmaster in a local troop. He grew up in the scout program and loved every moment of it. Nathan is married and has a daughter. He currently works as an autoworker at the Wentzville assembly plant. He attended Le Cordon Bleu where he was top of his class. He is currently attending school with a focus on cyber security. He started writing as a joke when he was fourteen years old, inspired by his older brother, M.P. Sorenson. Years later he found what he had written and thought, “If I wrote this at fourteen? What could I write now?” Again, it started as a joke—just something to keep him busy when he had nothing to do. The next thing he knew he had over a hundred thousand words written. That's when he decided to get serious. Three years of hard work later, and you see before you the completion of The Broken Brotherhood.