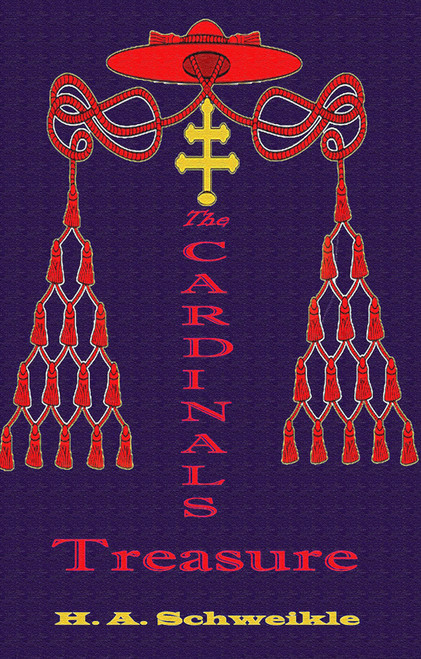 The Cardinal's Treasure
by H.A. Schweikle

The Cardinals Treasure was created from the storages spaces in my mind that were filled with three years of research on a project for a historical documentary. My background is in writing screenplays. I started The Cardinals Treasure as a synopsis to present to a director. I was carried away, and soon what should have been a maximum three-page synopsis became a thirty-two-thousand-word novel.

While researching the material for the documentary, I became knowledgeable on ancient Italian history and used that knowledge to create characters, events, and locations for the story.

The three treasures in the story are real. There is a Spear of Destiny, and it does reside in a museum in Vienna, Austria. It was stolen by Adolph Hitler in 1938 and returned by General George Patton after WWII. There is an ancient Quran signed by Yehya Ben Mohammed Ben in June of 1203. A few years ago, this Quran sold for millions of dollars at auction. The Crucifix is also real and was given to Blessed Gerard by Pope Paschal in the year 1113.

The locations on the Tyherranian Sea coast are also real; my wife and I have lived in that area for seven years, and I do know of dozens of small coves with caves where a treasure could be hidden. There is no town of San Donato, but there is a Greca Rota and a Camerota. And without a marina with breakwaters, small fishing boats are in danger of destruction during winter storms.

Southern Italy in ancient times was known as Magna Grecia and even today, many of the Italian people are descended from Greek settlements more than two thousand years old.

It was very common for captured people to convert from Catholicism to Muslim and vice versa.

H. A. Schweikle in the world of filmmaking has written seven screenplays that have been produced and four others that are still pending. The Cardinals Treasure is his first novel.

His screenplays include The Legend of the Durango Kid, which won a first-place award at the International Ski Film Festival in 1987. His other screenplay works, Colorado Riding High, Travel the Movie Trail, and DOBE and a COMPANY of HEROES, also won in national and international completion. His latest feature-length documentary, Barbarossa and the Towers of Italy, completed in 2009, has been selected in national and international film festivals.