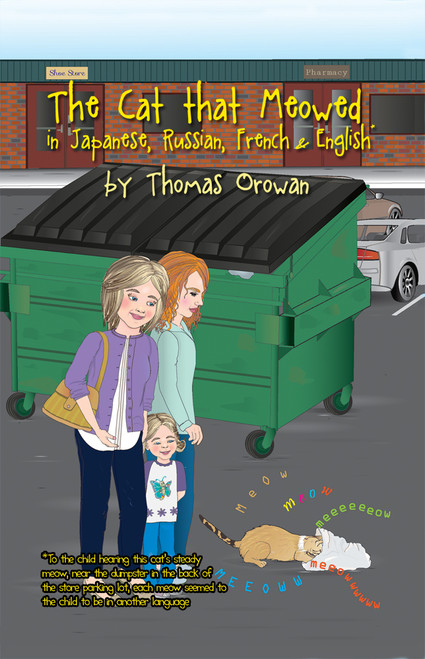 A small child goes on a shopping spree with her mother, Clarissa. Millie is about five-and-a-half-years-old.

After shopping at a strip mall, they exit through the back entrance, near Clarissa's parked car. Millie hesitates, sighting a cat, which has seen better days, picking at garbage near a huge dumpster. Millie has pity for the animal, who has probably never had a decent home—a stray. Clarissa urges Millie on, since she needs to do more shopping, but Millie insists, taking pity on the animal.

Clarissa waits a minute, but at that moment another woman joins them. The woman introduces herself as the owner of an animal clinic just a few blocks away. She offers to take the animal to examine her for diseases. Millie is pleased. The woman joins Millie and Clarissa and they drive to the Kobee Animal Clinic and Shelter two blocks away.

What will happen with Millie and the stray cat? This children's story is for ages five- to six-years-old.

The diversity in Thomas Orowan's background includes twelve years assisting his father in his animal export-import business (hides, camel hair, cashmere, angora hair, and pig bristles for those men who remember shaving with a brush and soapy cup each morning before work).

Orowan has a Bachelor of Music degree in piano from Juilliard and Mannes College in New York. He has performed at various locations in the US (Boston, New York, and Eureka, California), and was accompanist to a Japanese tenor when they made their Tokyo, debut at the great industrial hall downtown. Orowan has published original compositions (a short set of piano pieces, a brass trio, and a song "City Climate" published by the firm of Allyn & Bacon, in Boston). This children's story is Orowan's first writing experience.