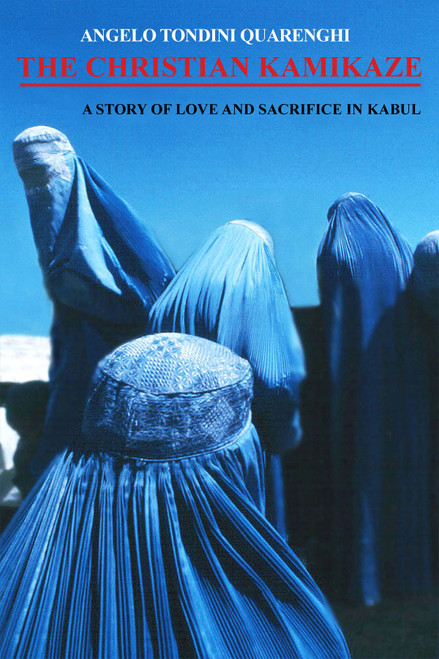 The Christian Kamikaze: A Story of Love and Sacrifice in Kabul
by Angelo Tondini Quarenghi

Paolo Vida, a sixty-year-old photographer, has a plan to redeem his anonymous and troubled existence. He leaves for Kabul on a military aircraft, and there he organizes his own suicide attack that will make him famous all over the world. It will be his answer to the attack on the Twin Towers and to all the human suicide bombers who have instilled fear in the West. Vida prepares with detailed precision his personal revenge against Islam, and the reader is dramatically drawn in and propelled forward up to the surprising conclusion.

The Christian Kamikaze is a grand tapestry of the Afghan capital right after the war that defeated the Taliban. Encounters with locals, political and religious collisions, passion and desperation, regrets, memories, and new discoveries alternate within the framework of a city reduced to rubble but still extraordinarily fascinating. The captivating plot is interwoven with the Afghanistan conflict and the militant Islamic-Western clash, which remains today an immediate and disturbing issue at the forefront of the world stage.

In this intense journey, a troubled and sensitive soul searches for redemption from failure and lives intensely up to the last moment, his human sacrifice, an act he hopes will send shockwaves throughout the Muslim and Christian world. This is a dramatic story but with an unusual ironic vein, of a man destroyed by technology and the modern world. A cross between Camus and Bellow, it is a riveting work that reveals with personal immediacy the confrontation of two cultures.

Angelo Tondini Quarenghi, a journalist and photographer, has spent over half his working and personal life traveling. He has been published extensively in many prestigious magazines, such as Harpers Bazaar, Geo, Architectural Digest, and Vogue, with hundreds of articles rich with stories and images. He has published books in Italy, the United States, Great Britain, and Russia. He studied under great political minds like Giovanni Sartori, Felix Oppenheimer, and David Apter, and the master photographer Art Kane, making the pursuit of his personal liberty a style of life, of which he is quite proud.

In the spring of 2002, he found himself in Kabul at that historical moment when it was the political hotspot of the world. There, right after the overthrow of the Taliban, he lived through an intense experience that gave him the inspiration to write this novel.