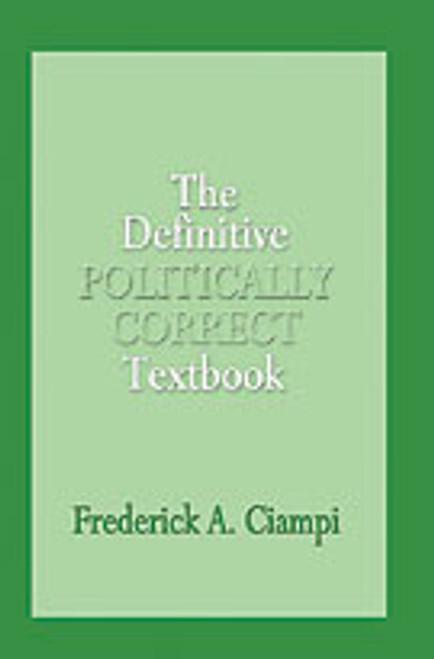 This textbook is the most politically correct book ever written for history, science, geography, English, and social science on behalf of the American student. With the advent of Political Correctness, our country had been overwhelmed with protests, complaints, objections, dissent, opposition, gripes, and assertions that the content of textbooks that our children are required to read in the classroom is full of material that is designed to insult and offend persons of all races, creeds, genders, ethnic origins, sexual orientation, and nationalities. This is the classroom instruction booklet for those people who do not wish to be offended. After the introduction pages, the book contains approximately 250 blank pages. The possessors of the book may, at their own discretion, fill in the blank pages with their own interpretation of what's being removed from classroom textbooks. It may well also make a nice diary. ABOUT THE AUTHOR: Frederick A. Ciampi grew up in an Italian Catholic household and joined the Marine Corps when he turned eighteen to find some peace and quiet. He later earned a degree in welding technology from the College of San Mateo and a bachelor of science degree in organizational behavior from the University of San Francisco. As a trained engineer, he learned to analyze everything he came across in life. A turning point in his life occurred after his tour in the USMC while attending college. Liberal students on campus went on a rampage, ostensibly to protest the Vietnam War. They destroyed most of the English and mathematics departments. (The students in the engineering department threatened physical harm and stopped the riot.) In addition, when other students learned of Ciampis Marine Corps background, they started calling him such things as baby killer. The questions he asked in response were: Why destroy your own learning institution as a protest? and I put my love in the line for your freedom and you call me names? These two incidents instigated Ciampis considerations of right and wrong, both morally and ethically, and eventually led to The Definitive Politically Correct Textbook. (2003, paperback, 254 pages) Availability: Usually ships in 2-3 business days.
×