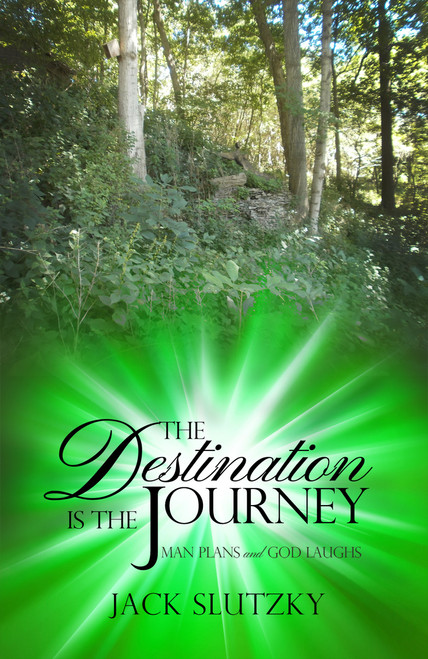 The Destination Is the Journey: Man Plans and God Laughs
by Jack Slutzky

The Destination Is the Journey: Man Plans and God Laughs has been in the works for more than three years and is a book for the times.

Seated amongst magnificent cloud-made replicas of the greatest sculptures ever produced, with the sound of a host of angels singing the Hallelujah Chorus, God sits brooding over news He recently heard that the planet Earth was rife with insanity and that the insanity is the result of His own creation the human being.

At the time, God believed endowing His creation with free will would enable this being to become one of His crowning achievements. Alas, He is beginning to accept the fact that it is not. God makes the decision to evaluate the problem. He hopes His delving into these happenings will not lead Him to renege on His words to Noah right after the flood, when He said Never more will the living creation be destroyed.

In due time, and with a fair amount of research, God determines that the answer to the problem resides in the lives of four good men. With the able assistance of Jesus, Satan and Mark Twain, the solution to the insanity on Earth can be resolved and God will know the appropriate action to take.

About the Author: Jack Slutzky lives with his wife on the banks of Oatka Creek in LeRoy, New York. He retired as a distinguished professor at The Rochester Institute of Technology after 28 years. During that time he was nominated 17 times as Outstanding Teacher and received that award for 1981-1982. The same year he was named Citizen of the Year by the Kiwanis Club.

Before going to Rochester, Slutzky worked as an animator for Walt Disney Studios; painted portraits of Hollywood movie stars for Paramount Portrait Studios; worked for NBC in the Sales Promotion Department; and served as President and Creative Director for an advertising agency.

Slutzky has traveled extensively, giving workshops throughout Europe and the United States. He is also the author of Mindscapes, Damaged and The Good Teacher.

The Dedication to the Trail of My Life

The Dead Man is Alive