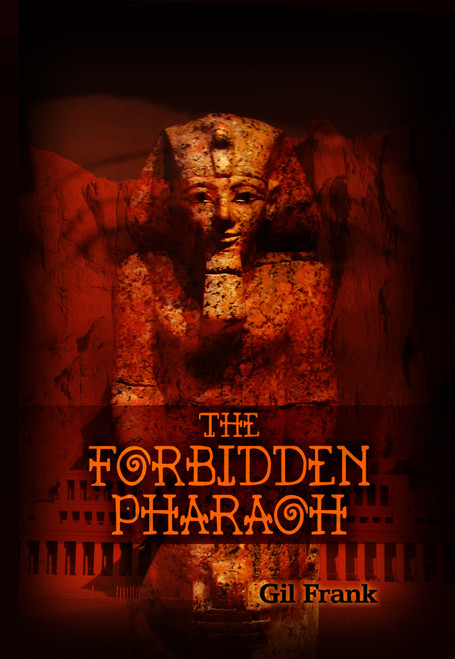 The Forbidden Pharaoh
by Gil Frank

Hatshepsut has puzzled archaeologists and historians alike since evidence of her reign first came to light. Thought to be ruling in lieu of Tuthmosis III (who was a child), scholars pictured her as an evil aunt. Nothing could have been further from the truth. Tuthmosis remained in the background, allowing Hatshepsut to rule in spite of vehement objections from his faction. The reason could have been a marriage between them, but much more likely the immense popularity of Hatshepsut with her people.

Generally remembered as being the woman who wore a beard and mens clothing in order to be pharaoh, her reign is regarded by historians to have been a peaceful one, though it remains a matter for conjecture.

Here, Gil Frank takes the reader back to the time of Hatshepsut's Jubilee Festival during a period of unrest with the Prince of Kadesh, expanding on the pharaohs controversial biblical connection. Franks descriptive style brings the era back to life in a colourful sequence of interrelated events.

For all who enjoy a great epic story, especially students of life in Ancient Egypt, The Forbidden Pharaoh is essential reading.

A writer since he could hold a pen, Gil Frank produced award-winning essays and poetry while still at school. His interest in Ancient Egypt also began early, but it was only a hobby until he actually visited the country in his youth.

Married and supporting three children, Gil had to work long hours in office management limiting his writing to spare time. He secured scraps of work in journalism, topical commentary and even as a satirist for a number of periodicals and newspapers.

In early retirement, Gil went on to further his studies in Egyptology, specialising in the New Kingdom. He began sketching notes for The Forbidden Pharaoh two years before setting it to paper in sequential order. Out of all the famous Eighteenth Dynasty Pharaohs to choose from, he admits to a soft spot for Hatshepsut and a childhood fascination in what lay behind her Mona Lisa smile.

The Four of Us