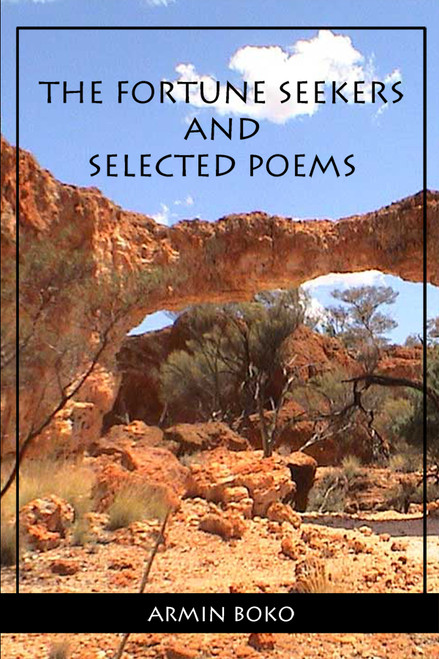 The Fortune Seekers and Selected Poems
by Armin Boko

Greaving SAS Major Peter Gallagher finds himself on a discovery tour of the Wild West sucked in by his wealthy in-laws. Their once prosperous cattle station is in deep water. It is run by a half-cast, Silver, a villain whose word is the only law among natives free boarding. Despite the prohibition, the natives are binging on illegally-brought-in Lambrusco, supplied courtesy of a mining exploration company Light Metals Pty, whose helicopter hired by Chinese swarms above the ground in aerial prospecting, not entirely different to a flying vulture. They stumble on a promising spodumene find and hence big-time financiers take over. The Chinese triad investors draw in a shady stockbroker Stanly dAlphonso and Sven Mutson Law Firm. Wheelings and dealings, double-crosses, and deadly vengeance follow.

Meanwhile Peters father-in-law, Retired Brigadier Ian Smeetson, arrives on the scene. From a couldnt-care-less personality, lures of promised riches transform our man to a reckless hunter and lead to his tragic death.

Toward the conclusion, they all end up searching for the elusive rainbow, apart from Marylin Ryan, Svens partner, and Peter, both deeply in love about to tie up the knot.

Peters father, in the remote Norwest of Tasmania, like a hermit in a shack, describes another remote part of Australia and some of the real-life fascinating characters who call it home. On a high, the newlyweds decide to move in with the old man.

Born in Croatia, Joseph Tomasevic (73) worked in many parts of the worldanything from sugar cane cutting, coal mining, steel inspection, gold prospecting, and science. It was a good school of life experiences. Add to this an adventurous nature, single-handed ocean voyages, and passion for middle-distance running.

He is married to Gisela nee Wendler (1963),without children, and a resident (in between expeditions) south of Sydney, NSW, Australia.