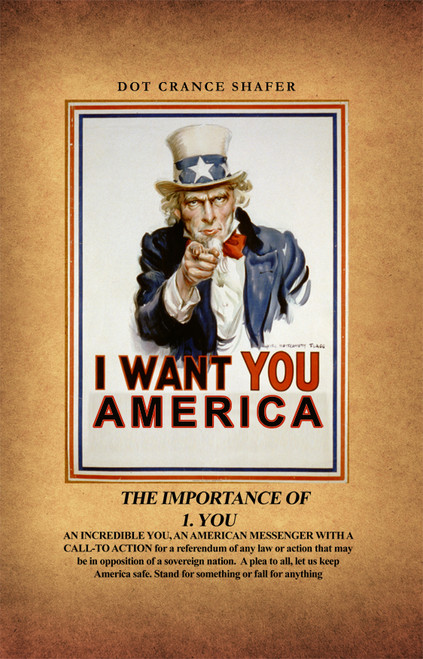 The Importance of 1. You
by Dot Crance Shafer

All one has to do is listen to the news on TV, radio, the social media or read the newspapers to be informed. America is in trouble and many question the destiny of this nation. It appears the government by the people and for the people will soon be a global government should the direction of America not be turned around. Can anything be done to make a difference in America today? You bet there is... it is the importance of ONE and that ONE is YOU. You are an incredible ONE that can be a Pilgrim of the twenty-first century to help make America free again.

The uprising in the Middle East and the One World Order are leading to the emergence of the Holy Roman Empire as America faces spiritual warfare. It is appalling what people are doing, simply because they have no clue as to what is happening, not only in America, but to America.

The Importance of 1. You explains why everyone has a call-to-action, be it ever so small. It does not matter if you are Jewish, Christian, Muslim, Atheist, Agnostic, or of other beliefs; YOU have a call-to-action as a patriotic American citizen to help keep America free with liberty and justice for all. To support Americas founding documents and to maintain what is right in America, you must change what is wrong by following the pathways given within the founding documents. Will you be an American Messenger?

Dot Crance Shafer is a retired nurse who had the opportunity to care for those hurting, those with debilitating disease, and those with disabilities. Understanding firsthand the hardships caused by lifes stressful changes and the pressure of depleted finances, Dot also had the opportunity to spend time in real estate and saw difficult situations for some to purchase or keep a home.

After retirement, Dot spent a year as a school nurse and witnessed children in neglect, family breakups, single parent situations, and children with learning disabilities. After leaving the school system, she became involved in the political arena and learned what was really happening in and to the nation. It was frightening. As a result, she felt called to try and affect change in America and became an American Messenger with hope that most, if not all, would join the movement with her.