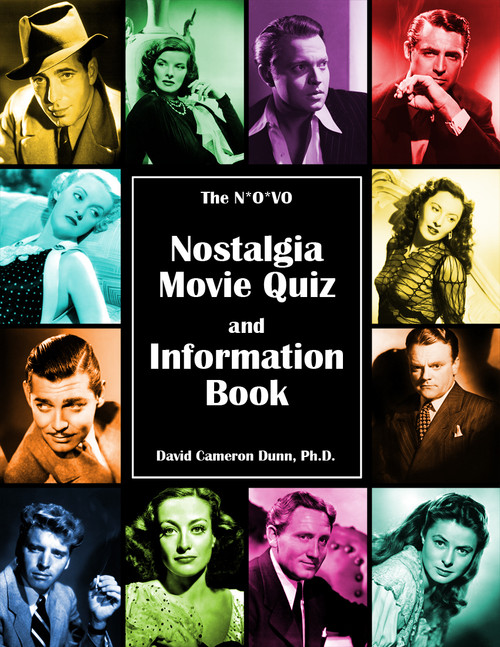 The N*O*VO Nostalgia Movie Quiz and Information Book was written as a labor of love by a cinephile. Its intended audience is the kindred spirits out there who not only relish the good, old films and players, but who also enjoy being asked questions about them. The book goes a step further by quantifying the difficulty of the questions, providing the readers with the opportunity to record their scores and batting averages. Not only may the individual assess his or her personal expertise in the realm of motion picture lore, but also in the competitive way with family and friends as a game. In addition to the quiz section, which comprises the pronounced majority of the book, the readers will also find several interesting informational appendices. In view of the above, the reader will find this work to be set apart from the many other similar entries on the shelves!

David Cameron Dunn, Ph.D. was born in 1934 in Loma Linda, California, and graduated from Herbert Hoover High School in San Diego in 1951. He completed a four-year active tour of duty in the United States Air Force (1952-1956).

In 1958, taking advantage of the Korean War G.I. Bill, Dunn began his higher education at Cornell Universitys School of Hotel Administration in Ithaca, New York. There, he received his B.S. in 1962, his M.S. in 1965, and his Ph.D in 1970. He remained on the Hotel Schools financial management faculty for more than thirty years, retiring in 1994 as professor emeritus.

Dunn was bitten by the movie bug in the early 1940s and, along with stamp collecting, has made motion pictures one of his hobbies ever since. He and his wife, Elaine Joyce, just celebrated their sixty-second anniversary. Among the authors other works is Deutsch From Scratch: an Elementary Approach to Learning German (RoseDog Books, 2010).