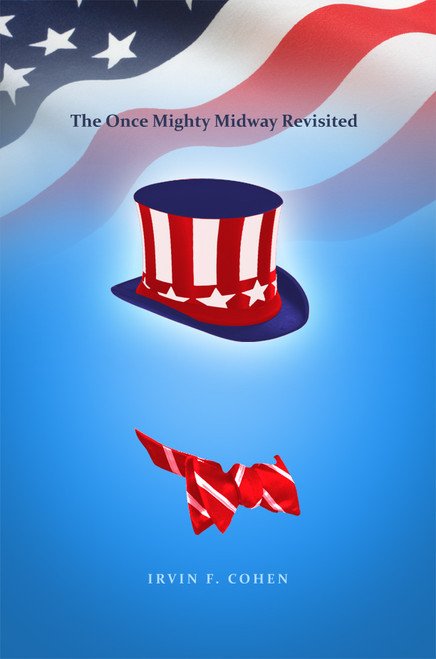 The Once Mighty Midway Revisited
by Irvin F. Cohen

The Once Mighty Midway Revisited is a short, epic poem written in the American genre. The author patterns himself in the tradition of Walt Whitman and Longfellow, as well as the English poet William Butler Yeats. For Mr. Cohen also relies heavily upon iambic pentameter, free verse and enjambment.

However what makes Cohen so uniquely different is that in comparison to the former, he also appears to be quite reflective of many of the Avant-Garde poets of the past century, especially those of the Beat Movement - and in particular, of Allen Ginsberg. This is truly ironic in that there could be no greater odd couple than these two as to their basic philosophies and polemics. Surely this is a rather strange intersection of two diametrically-opposed viewpoints of two very distinct and disparate souls.

Moreover, beyond The Once Mighty Midway Revisiteds strong cadence, meter and poetic schemata, lies a highly reflective, conservative vision of America; in particular of a vast paean to American Exceptionalism. However the author views our nation to be at a rather crucial and perilous juncture, one in which he sees our future and very existence to be in great peril. Nevertheless, even though the author paints a rather bleak and pessimistic tableau, he still remains quite optimistic; for it is in his and our national DNA to be eternally hopeful of the future and of its redemptive qualities, in spite of the many forces from within and without which are so doggedly hellbent on destroying us. And so, just as Cato the Elder warned the Roman Senate with Carthago delenda est; so too Mr. Cohen warns us with America defendenda est; again, from mortal enemies both domestic and foreign.

Despite a life of many adventures, Mr. Cohen believes he has but two small accomplishments therein.

First is his military service as a combat-wounded Marine veteran of the Vietnam War. Even though he has several ribbons and medals (11 in toto), he does not consider himself a war hero. As far as he is concerned the only true war heroes are either buried here, or as of yet, have still not been repatriated. However what he does proudly say is that he is very fortunate and highly honored to have served in the company of many truly heroic and exceedingly brave men.

Mr. Cohen considers his second accomplishment to have been his education and brief academic career. He began his career in 1963 as an intellectual lout and barbarian; i.e., as a typical, unprepared failure of the public school system. He quickly dropped out, bummed around and eventually joined the Marine Corps. After some more so-called adventures, he decided to do something meaningful and worthwhile with his life; and so he chose to formally study the Classics (Latin and Greek with French as his academic language). He has a BA from USC and has studied in both Paris and Rome.

Once Again to You, Honey