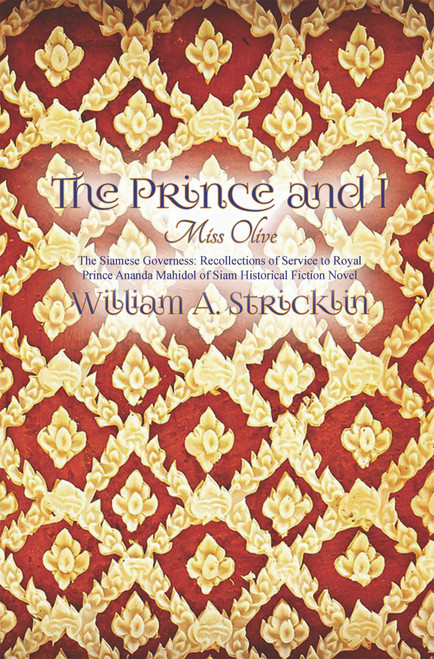 The Prince and I Miss Olive

William A. Stricklin’s governess from 1938 to 1946, Miss Olive, was previously one of the servants for the daughter and two sons of her widowed friend Sangwan. The oldest son, at nine-years-old, was proclaimed King of Siam Ananda Mahidol Rama VIII in 1935. On June 9, 1946 King Ananda was found shot in the head four days before returning to Switzerland to finish his doctorate degree. His younger brother, Bhumi Adulyadej then ascended the throne as King of Siam Rama IX. As Miss Olive left Siam in 1937, she was not one of the three servants who were falsely executed for King Ananda’s murder. Miss Olive feared telling her side of the story until the passing of King Rama IX in 2016. Respectful of the terms of the “non-fiction contract,” where facts have been forever lost to history,Stricklin presents The Prince and I - Miss Olive as a historical novel. Readers will observe that the book is almost entirely non-fiction and, in any event, remains a fascinating unsolved murder mystery

William A. Stricklin was born in Berkeley, CA. He is a Phi Beta Kappa scholar who earned his AB with honors at the University of California, Berkeley. He later received his JD at Harvard Law School and cloak-and-dagger training at Fort Holabird US Army Counterintelligence School learning Cold Way spy-craft. He served in the Old Senate Office Building in the Vice-President’s office for the last year and a half of the Dwight Eisenhower administration.

The Deep Roots of the Olive Tree

The Prince and I - Miss Olive - eBook