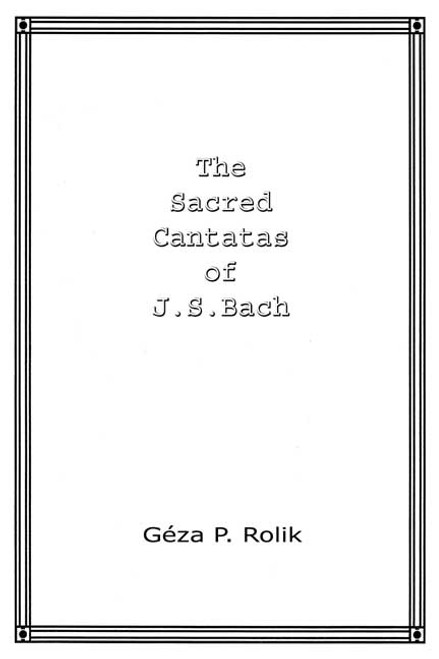 by Gza P. Rolik In addition to being a prolific composer and a well known organist, Johann Sebastian Bach was profoundly religious, as evidenced in the more than 260 sacred cantatas he composed for performance in Lutheran Church services. Although much has been written about Bachs musicianship, in The Sacred Cantatas of J. S. Bach, Gza Rolik demonstrates the famed composers piety by examining eleven sacred cantatas and the St. John Passion, and in the process, examines musical excerpts Bach employed to enhance the spiritual essence of the poetic words. To aid in the understanding of the performance of the cantatas during the Lutheran service in Bachs time, Rolik also discusses the particulars pertaining to the voices and Baroque instruments available to Bach in his position as the cantor at the Thomaskirche and Nicholaikirche in Leipzig from 1723 to 1750. ABOUT THE AUTHOR Born in 1930, Gza P. Rolik began piano lessons at the age of six. He was awarded a master of music degree in 1957 by the Chicago Conservatory of Music, where he majored in theory and composition. In 1955, after placing second in a Chicago-wide competition, he performed Beethovens Fifth Piano Concerto, The Emperor, as soloist with the Chicago Symphony Orchestra. Mr. Rolik was choir director and organist at St. Johns Assyrian Church in Chicago for four and a half years, and after moving to California, for fourteen years at St. Bedes Roman Catholic Church in La Canada. A player in many orchestras, he currently holds a chair in the Pasadena California Orchestra and has organized small Baroque music ensembles. Mr. Rolik has composed pieces for SATB choirs and various orchestral works, many of which have been performed. He is a teacher of piano, violin, and viola. (2005, paperback, 116 pages) Availability: Usually ships in 2-3 business days.
×