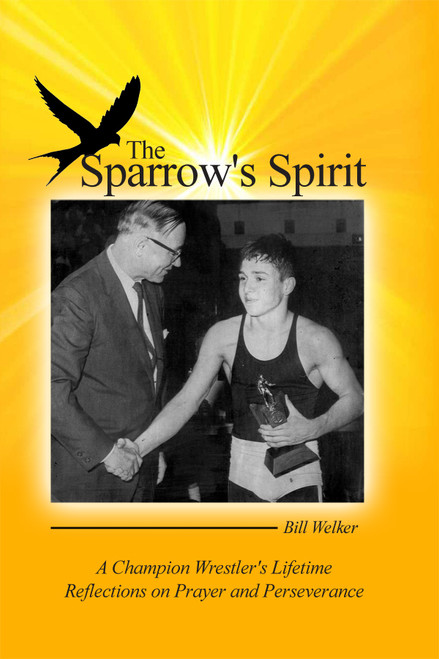 The Sparrow’s Spirit is an inspirational tale of triumph over self-destruction and adversity. Bill Welker vividly describes his lifelong battle to conquer the ultimate opponent – himself.

Dr. Bill Welker’s road to adulthood was filled with many trial-and-error experiences in which he usually took the wrong path. He grew up under the dominion of a loving mother and an austere father.

As an adolescent, Welker’s life revolved around the sport of wrestling – and nothing else. Studying in high school was an unwanted necessity to stay eligible.

But the desire to continue on the mats in college decreased until the fire to compete burned out. Welker began to make very poor choices which resulted in his removal from the wrestling team and almost led to his expulsion from school.

Welker felt totally alone as his life began to collapse around him. There was nowhere to turn; he couldn’t go home a failure. He was absorbed by self-doubt, uselessness, and fell into a deep depression.

Welker had lost all hope until he began to change priorities and found someone who believed in him. Still, the struggle wasn’t over, but the struggle is the glory.

An award-winning educator and one of the country’s foremost authorities on Folkstyle wrestling, Dr. Bill Welker has published the national best-seller The Wrestling Drill Book, a DVD, and hundreds of articles on the mat sport since 1974.

Welker has also published numerous practical papers on the art and science of teaching during his 40-year career. Upon retiring, he was selected as “Teacher of the Year” by the Wheeling (WV) Area Chamber of Commerce. He was also inducted into West Virginia University’s prestigious Jasper N. Deahl Honors Society for his contributions to education.

Songs of the Spirit - eBook

The Simplicity of My Poetry