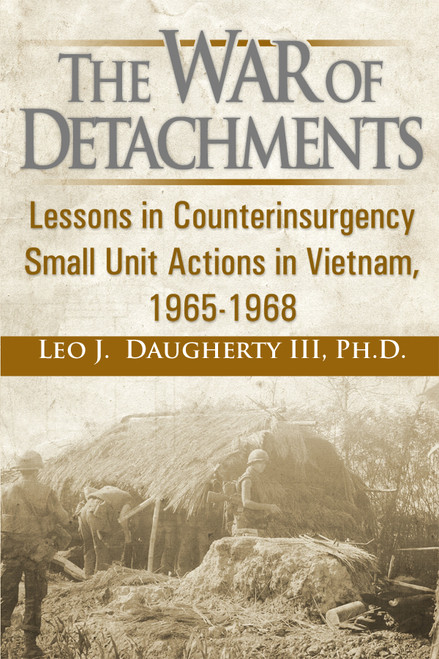 During the first three years of the United States involvement in the Vietnam War (1965-1968), the war was fought largely by small unit actions that involved squads and battalions. The War of Detachments: Lessons in Counterinsurgency Small Unit Actions in Vietnam, 1965-1968 recalls the men who engaged large-scale Viet Cong units in the rice paddies, hamlets, and jungles of South Vietnam.

With a brief introduction discussing Prussian military theorist Carl von Clausewitzs theory of Kliene Krieg or small wars, this book is a collection of accounts written by platoon and company commanders as part of the U.S. Armys Captains Career Course, which the soldiers undertook upon their return from Vietnam in the mid to late 1960s. Their entries indicate not only the validity of their training prior to serving in Vietnam, but also the validity of the small wars theory, and how Vietnams war of detachments shaped what has been described as the new American way of warfare.

Leo J. Daugherty III, Ph.D. is the Command Historian for the United States Army Accessions Command at Fort Knox, Kentucky. He is a Marine Corps reservist and a veteran of Desert Shield/Desert Storm.

He has a B.A. and M.A. in history from John Carroll University in Cleveland, Ohio, and a Ph.D. in U.S. military and diplomatic history from Ohio State University. He is the author of nine books, the latest of which is Pioneers in Amphibious Warfare, 1898-1941. He is currently at work on two more books, one of which will examine ground combat training in the U.S. Army and Marine Corps from 1945-1980, and the other is a projected two-volume set on the U.S. Marine Corps and Counterinsurgency from 1900-2009. He has also written scholarly articles and reviews for the Journal of Slavic Military Studies, Leatherneck, and The Marine Corps Gazette.

He and his wife, Dr. Rhonda L. Smith-Daugherty, live in Rineyville, Kentucky.