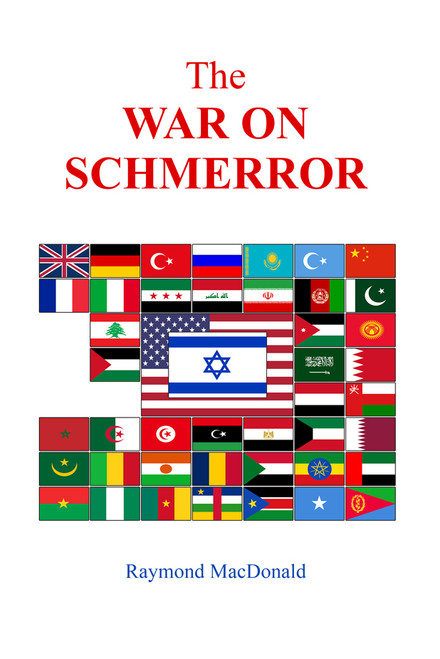 The War on Schmerror
by Raymond MacDonald

The War on Schmerror describes how a small Middle Eastern nation has subverted the US Government into acting as its proxy for the purpose of destroying all of its international enemies. For the expenditure of a relatively modest sum spent on lobbying, Israel and the Israel Lobby have catalyzed a gigantic expenditure by the US Government in blood, treasure, diplomatic loss of face, inculcation of hatred across the world, and the embarrassment of having created a political morass that it does not know how to resolve.

The title of this book is a wry reflection on how the World Zionist Federation and the Israel Lobby in general has promoted the concept of transplanting a Biblical Abstraction into the hostile Arab World with predictable results and how the American Christian Evangelical Movement has been co-opted politically into this amazing endeavor.

The War on Schmerror was easily launched by the Islamic attacks on the World Trade Center and the Pentagon by the man who clearly understood the American penchant for gross over-reaction. The entire process may be likened to an organ transplant from Europe and other Middle Eastern countries into the body of the Arab World. As with all organ transplants, it is essential to provide constant immune system depressants in order to sustain the transplants from rejection. In this analogy, the US Government provides the immune system suppressant in the form of endless and increasing injections of military equipment, diplomatic support, and annual cash payments. It may take generations for this crisis to be resolved and the failure to address the roots of the situation will ensure its continuity and even expansion.