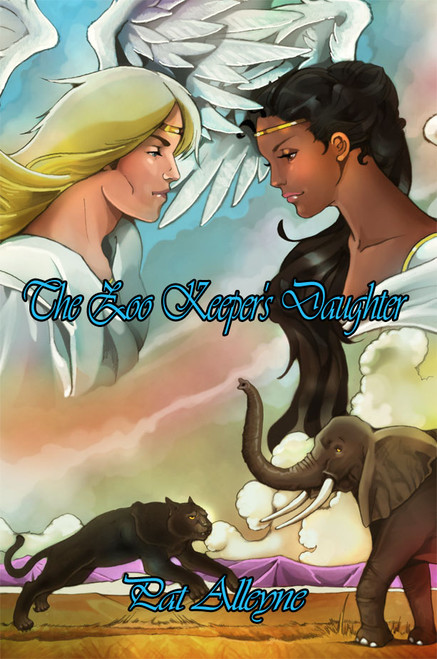 The Zoo Keeper’s Daughter is about a young girl name Milky who lives with her parents. Milky, who lives on the other side of the world, cannot understand why her dreams are tormented with shadows of black cats and a boy with blue eyes, though she is always protected by African elephants. Later in life, she is confronted in her dream by the angel Nadine. Milky has heard her name before, in a séance that was done when she was a very young girl. But, this time, the angel comes with a message: that Milky is the chosen one.

Sean’s life is different. At a very young age, he lost his missionary parents in Africa. A war had broken out among the tribes and many lives and animals were consumed by fire and bloodshed. Sean was found in the jungle unconscious and was housed in a hospital tent. After time had passed, the war was over. Sean was lucky to be adopted and brought to England. Growing up in England, he soon discovered he had magical powers, which he kept a secret.

There is another thing Sean starts to experience—his dreams of meeting a beautiful brown-skinned girl by the name of Milky. But he found himself laughing and saying it is only a dream. But later, as Sean became older and came to America to complete his education, he finally meets the girl of his dreams. That’s when their adventure started.

For those of you who fancy angels, you will most definitely fall in love with Milky and Sean. They will enhance your life with their great adventure.

Pat Alleyne is a native of New York and currently lives in Georgia with her husband, George. She is the mother of two, Lolita Todd and George Jr. Mrs. Alleyne retired after thirty years of service at St. Luke’s Roosevelt Hospital in New York City. Her interest, in addition to writing, includes doll collecting. She also dabbles in making jewelry and she owns a copyright to her own creation Bow Dolls. She loves movies and electronic games.