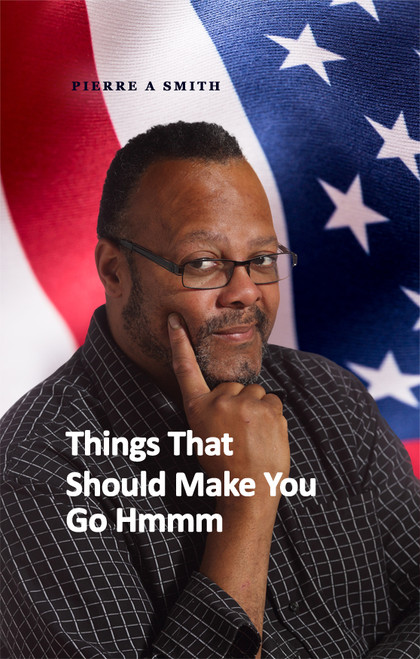 Things That Should Make You Go Hmmm
by Pierre A Smith

Things That Should Make You Go Hmmm is a must-read. Why do you believe what you believe? If the truth is so important, it will set you free. Isnt it important what you are hearing is the truth? After all, a lie can make it halfway around the world before the truth gets its shoes on.

Do you really know what is happening in the inner city schools? Have you ever wondered why society as a whole holds the opinions that it does? Why do over 90 percent of Blacks vote Democrat when the Republicans freed them and voted for Civil Rights? How many people know that ice does not freeze at 32 degrees and the North Pole is really in Canada? Which President warned us about Saddam Husseins weapons of mass destruction? George Bush? Guess again. Do you know the power of the media?

This is not a politically correct book.

Pierre A Smith was born in Milwaukee, Wisconsin, in 1967. At age 12 he found current events in the news more interesting than movies because they were real. In his early twenties, as a Black man, he wanted to see which president had more Black jobs and businesses created under their watch: Carter or Reagan? He was shocked by what he found when he went to the library and researched the statistical abstract of the United States. This fueled Pierres hunger for more knowledge because the facts did not mirror popular belief, especially amongst Blacks who need it the most.

Pierre worked in a factory and bought a home when he was 26. He started a wood flooring business a year later and taught himself the trade. He has competed in robotic events and obtained his certified pilot certificate. He is an avid snowboarder, motorcycle rider, and bike rider to keep his heart fit. He has a voracious appetite for news in all forms of media and is an avid truth-seeker.

Throw Your Feet Over Your Shoulders: Beyond the Kindertransport

Til Debt Do Us Part

Time Never Was Where the Human Race Were Not