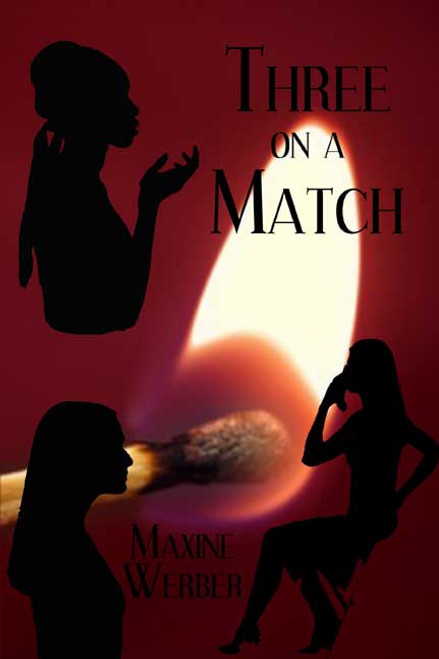 by Maxine Werber Three on a Match is a work of fiction that depicts the life of Roland Robinson, an abusive husband who destroys the lives of his three wives. Based on autobiographical events, the story explores the disturbing psychological underpinnings of physical and emotional abuse. Roland Robinson, a seemingly attractive, prosperous, and socially adept man, has a dark secret he initially hides from the women he meets: he has been sexually abused by his mother, Sylvia, since his infancy. Controlling and sexually manipulative, Sylvia Robinson refers to her son and herself as Mr. and Mrs. Robinson and tries everything in her power to destroy her sons marriages. She enjoys great success. Rolands first wife, Marcia, is swept off her feet by his debonair social graces but soon discovers his dark side: he begins physically abusing her and making irrational demands, even after the birth of their first son, Philip. After witnessing Sylvias manipulation of Roland, Marcia realizes he is taking his pent-up hatred for his mother out on his wife. Marcia divorces Roland, and the pattern continues with his second and third marriages. His second wife, Brenda, convinces Roland to see a psychiatrist, who allows him to admit his hatred for his mother; however, the help comes too late. Brenda divorces Roland, and he finally marries a call-girl named Susan, who dominates Roland as Sylvia does. Driven mad, Roland plots Susans murder but is finally punished by law for his crimes. Following the path of a troubled man, Three on a Match tells a sobering story about the cycle of abuse as it comes full circle in three generations of the Robinson family. ABOUT THE AUTHOR Maxine Werber was born in 1933 in Washington, D.C. Her father died when she was seven and a half, and when she was sixteen, her mother remarried and the family moved to Hewlett, Long Island, where she graduated from Woodmere High School in 1951. Her stepfather died in June of that year, and she moved back to Washington, D.C., with her mother and sister. She met her first husband when she was eighteen and he was twenty-three. She has two sons from that marriage, which ended in divorce. Writing poetry since she was thirteen, Maxine had several poems published over the years and has recently compiled them into a book, which is entitled It Could be Verse. She remarried in July of 1962 to Leonard Werber and has a son and a daughter with him, plus a total of seven grandchildren and one great-grandson. Maxine and Len reside in Silver Spring, Maryland. (2007, paperback, 188 pages) Availability: Usually ships in 2-3 business days.
×

A Book of Three Tales