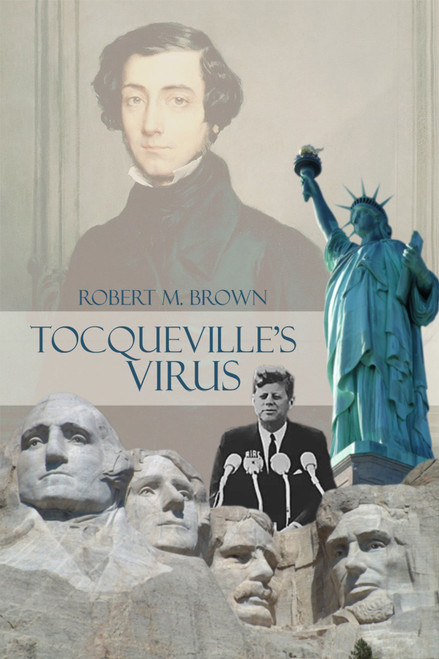 America's rise to superpower status was fast and violent. The arrest of its global reach and grasp is now equally wild and punishing, and Greg Hamilton is in the eye of that cyclone. In Congress, he represents half a million upstate New York constituents. Greg loves his country, his district's people and their way of life, and his large and loving family, and he yearns to do his job well. But an all-powerful and implacable monster is scrambling his country's ability to lead and stay prosperous.

It is tenaciously tearing at his peoples' sense of community and is mercilessly toying with the ingrained cracks in his family's cohesion and his own professional effectiveness. Greg struggles just to fathom the hideous adversary's shape. It seems both a part of him and far outside him. Yes, piqued reader, Tocqueville's Virus is fiction, and you'll have to decide for yourself how much of it is reality and our stark, early twenty-first-century fate.

Robert M. Brown brings to Tocqueville's Virus the experience of twenty years of Regular Army, commissioned service, and twenty years of university teaching. He has lived for eight years outside the U.S. and has worked at delivering America's Cold War shield and its Southeast Asian nation-building programs. He holds two Bronze Stars for Valor and a Vietnamese Cross of Gallantry. With a baccalaureate, a masters, and a doctorate in international and comparative politics and economics, Brown has taught undergraduates and adult graduate students across the eastern U.S. and in Germany, Spain, and England. His extensive writings on American foreign policy include the book America's Way with the World. Brown credits much of his political insight to family and friendship networks opened when he married a Berlin-born German.

Secrets of the AIDS Virus

To the Highest Bidder

To Susan with Love

To Catch a Sniper and Let Her Go by Ellery Dean