Transsexual Transformed by the Power of God 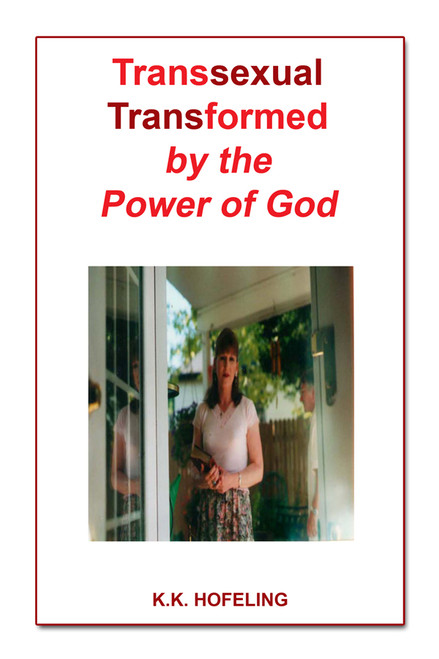 Transsexual Transformed by the Power of God

Transsexual Transformed by the Power of God
by K.K. Hofeling

Zechariah 12: 1: The Lord which stretcheth forth the heavens, and layeth the foundation of the earth, AND FORMETH THE SPIRIT OF MAN WITHIN HIM.

Riddle me this: Why would a man want to be a woman? Are some men really females trapped in male bodies? Do environment and upbringing have any bearing on the subject? Does God make a mistake at birth?

Come near and hear the true story of a post-operative transgendered male to female, a man who turned his back on God and walked away from his calling to fulfill his own passion, lust, and desires in life, only to discover that he, like the prodigal son, was destined to return to his Father in heaven. Read about his controversial, up-close, and personal views on the subject as he relays them to the Word of God: the Holy Bible.

Brother K.K. Hofeling was illegitimately born on August 7, 1957, in Petaluma, California, to Norvell and Mary Hofeling. He was raised and loved by his father as one of his own. After graduating high school in 1975, he joined the U.S. Air Force and spent four years at Ellsworth Air Force Base, Rapid City, South Dakota.

Though born-again in 1977, Brother K.K. did not begin serving the Lord until 1979, in which year the Lord led him to Houston, Texas, where in time he helped start and pastor Fellowship of the Spirit Church. From the age of fourteen, Brother K.K. remembers having a deep-seated desire to be the opposite sex (female).

Brother K.K. succumbed to the perverse spirit in the latter part of 1996, at which time he began living and working as a female. He began hormone therapy and permanent hair removal, attended transsexual therapy groups and, in early August 2000, had sexual reassignment surgery in Brussels, Belgium.

Brother K.K. believes to this day that the bastard curse, generational curse, and transference of spirits led him down a path of many hurtful lusts, ruining two marriages, hurting those he loved, and destroying his testimony in the Lord before God and man. Some would say that he was never really saved. Read the book and you decide.

Transformation and Healing by Ayahuasca Spirit in the Amazonian Rainforest