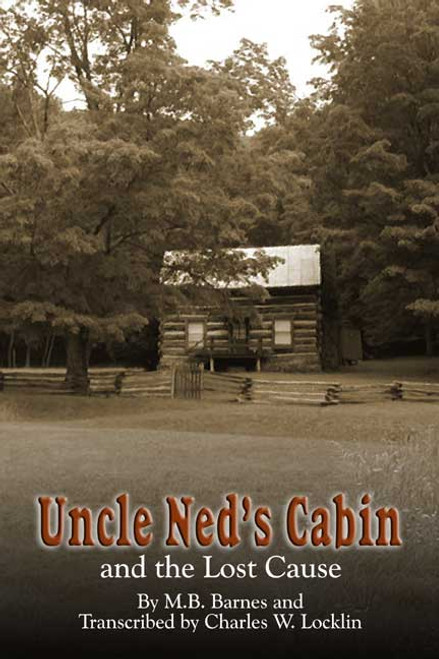 by M. B. Barnes and Transcribed by Charles W. Locklin Upon discovery of the written work Uncle Ned's Cabin and The Lost Cause, of Mr. M. B. Barnes, a reading of his work extended well into the night as his biographical life experiences provided more than history; points of humor and sorrow were noted as well as his observations of life. The entire experience was most informing and enjoyable. In transcription of Uncle Ned's Cabin and The Lost Cause, a very detailed experience both in learning about life in the 1800s and about the life of Mr. Barnes enlightened and informed Charles, Doris, and relatives who read the transcription. One of the best issues Mr. Barnes relates is his time in the Confederate Army during the War Between the States. Of course, Mr. Barnes writes of his childhood, his loves, a little philosophy on life, and the black culture of his time. This is an excellent historical biography of the South in the eighteen-hundreds. ABOUT THE AUTHOR Charles W. Locklin is a retired U.S. Army Major and a retired Civil Service employee, having spent forty-two years with the Federal Government. Raised in Monroeville, Alabama (Monroeville is known as the Literary Capital of Alabama because such famous writers as Harper Lee and Truman Capote have called it home), Charles now lives with his spouse of forty-five years, Doris Tait, in Montgomery, Alabama. Upon completion of high school in Monroeville, Charles attended one quarter at Auburn University, Auburn, Alabama, and then enlisted in the U.S. Army in October 1958 and completed twenty-one years (eight years of enlisted and thirteen years as a commissioned officer). Charles married Lottie Doris Tait (DOM: 1961) and they had three children: a boy named Charles William Locklin III (DOB: 1963) and two girls named Dinah Lynn Locklin (DOB: 1964) and Sarah Elizabeth Locklin (DOB: 1969). Charles W. Locklin is a highly decorated combat veteran (Silver Star, two Bronze Stars with V device for Valor, and two Purple Hearts). He served as the 1st Platoon Leader, I Troop, 3/11 Armored Cavalry Regiment in Vietnam, 1967 to 1968. After Vietnam, time was awarded to allow Charles to complete a B.S. in Elementary Education at the University of Tampa, Florida. Upon retirement, Charles obtained a master's degree in Computer Science and Information Management from Troy University, Montgomery, Alabama. (2008, paperback, 98 pages) Availability: Usually ships in 2-3 business days.
×