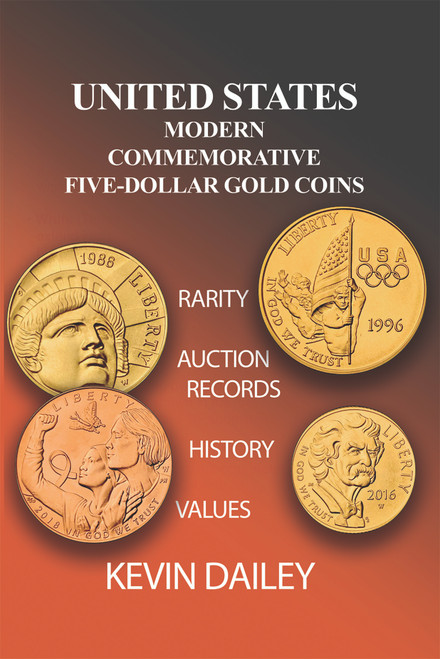 First steps are often the hardest, but with first steps we begin our journeys of discovery and destiny. United States Modern Commemorative Five-Dollar Gold Coins is a first-step book. It is the first, and to date, only book detailing modern gold commemoratives. Unlike some other coin programs offered by the United States Mint, these coins will be collected by future numismatists because they maintain a tradition of collecting that began in the nineteenth century and endures to this day. Gold commemoratives are like compelling snap shots of this nation’s history. Each piece is unique with an enduring story to tell, enduring as the metal they are made of. They tell us stories of not only our past but who we are today. Filled with facts and figures, this book will help you decide which path you want to take when collecting these coins and establishing fair market prices so you are never left with the unpleasant sense of feeling like you overspent for a coin. Beyond the how best to buy is the “why” to buy. Yes, this book will make you a smarter buyer. but it will also make you a smarter numismatist and a more satisfied collector.

Kevin Dailey is a retired high school agri-science teacher. His non-curricular teaching responsibilities included coaching successful wrestling, golf, and chess teams. The chess team, under his direction, completed many seasons undefeated and won numerous tournaments, including two class 4A (large school) Illinois state championship titles. He received the Illinois Chess Coach of the Year award in 2011. He is a tree-hugging part-time professional arborist that still gives advice and climbs trees for monetary gain but mostly for the fun of it. He also enjoys working with wood, mostly making projects from the wood of trees he has trimmed or removed. His sole professional numismatic resume consisted of eight years of meaningful employment at Harlan J Berk, U.S. Coin and Bullion. His avocational numismatic involvements include life memberships in the following coin hobby organizations: The Will County Coin Club, The Chicago Coin Club, The Illinois Numismatic Association, The Central States Numismatic Society, and the American Numismatic Association. He has held various offices at the local and state levels. He enjoys exhibiting his coins at small shows and national conventions. He is a certified ANA exhibit judge. But like so many people that love the lore of coins, he began collecting as a youth. For him, the day he became a collector was when a dear aunt from Montana placed in his hand a worn 1885 silver dollar. For Dailey, it is more than a cherished coin; it represents the first step of the wondrous, lifelong journey that is numismatics.

Dare to Be Different

The Road of Sorrow

Strong Words for the Week

Strong Words for the Week - eBook