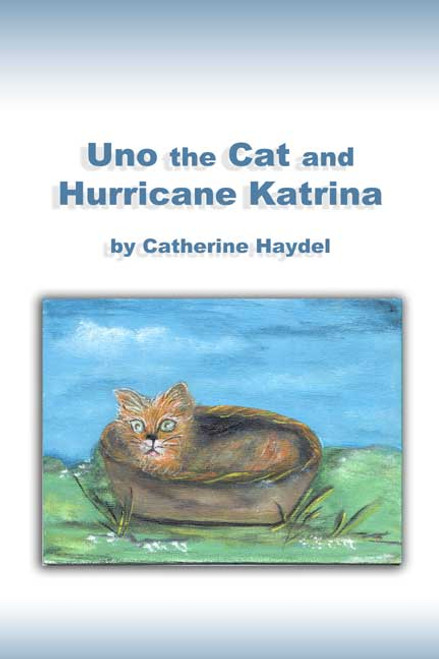 by Catherine Haydel, Illustrations by Felice Haydel I wrote this book three weeks after Hurricane Katrina. Upon returning from church I received a phone call from my daughter. She told me her house did not sustain any flooding. They were shocked to find this out because 95 percent of New Orleans was under water. One of their friends informed them there was a website called www.ngs.woc.noaa.gov-storms-Katrina. On the site, was an aerial view of the city of New Orleans. Once you located your neighborhood, you could zoom in and find your house, which is what they did. A week later, they managed to get into the city and finally to their neighborhood. It was like a little island; everywhere else was under water except for that small area. My daughter said it was a miracle, but the biggest miracle was when they saw Uno, their cat, running through a field toward them. This is Unos story. We dont know exactly what he did and how he survived, but he did manage to make it. I was working out at my gym one Saturday, this story started filling my head. I went home and wrote a fictitious account of Unos trials and tribulations. ABOUT THE AUTHOR My name is Catherine Haydel. I was born in New Orleans, lived in Los Angeles; Bay St. Louis; and Pass Christian, Mississippi. I was educated and graduated from Bay Senior High School in Bay St. Louis. I worked for South Central Bell in New Orleans from October 1974 to October 1977 before transferring to Pacific Bell late-1977 in Los Angeles. I worked for the company for thirty years. Retired since December 2004, I am embarking on my next phase of life. I am a workout enthusiast with a firm belief that physical fitness is the key to longevity, combined with water and a good diet, one can live his or her life fully, healthy, and happy. At fifty-two years old, everyone I meet insists I must be in my thirties, but I have a thirty-year-old daughter and two granddaughters to prove I am who I am. Now I am writing childrens books. The books I write teach children lessons in life. I will continue to produce more children books in the future. (2006, paperback, 34 pages) Availability: Usually ships in 2-3 business days.
×

In the Eye of the Hurricane Walter

Vahudrick (I): The Blood Gift