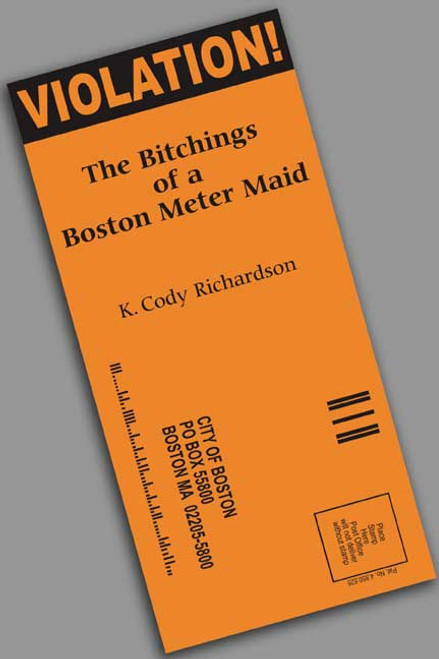 by K. Cody Richardson Undeniably, the most despised city worker would have to be the meter maid. Have you ever tried to talk your way out of a parking ticket only to be met with cold, curt barks from a heartless, sneering troglodyte, who places that irritating ticket on your windshield no matter what excuse you plead? Have you ever wondered what goes through the mind of that loathsome creature? Have you ever wondered how anyone in their right mind could be a meter maid? Violation! The Bitchings of a Boston Meter Maid recounts ten days in the life of Bailey Murphy, a politically incorrect, divorced mother trying to make ends meet while battling the day-to-day harassment as a Boston meter maid without losing her mind. Whilst tagging vehicles, she gives us her view of the job, the people she encounters, and her reactions to ludicrous and sometimes vicious rhetoric. Bailey is not your typical officer, and her story is not a normal Boston tale. Violation! takes you on a wild and often disturbing ride around Boston, a "sex, drugs, and rock-n-roll...and parking tickets" experience. Her bitchings will leave you with a new understanding and possibly a hint of respect for meter maids. Or you will just love to hate this obnoxious woman. ABOUT THE AUTHOR K. Cody Richardson grew up in DeWitt, New York and received a degree in English Literature from The State University of New York at Plattsburgh. Wanting to experience city life, she moved to Boston, Massachusetts in 1988. Before becoming a meter maid, she worked in the downtown Barnes and Noble Bookstore, and she was a bartender at the Joyce Chen Restaurant in the theater district. In the early summer of 1993, she donned the badge and the ugly white hat, and she lived the bizarre, humorous, and sometimes horrid life of the Boston meter maid for over six years. She met her husband Craig while tagging vehicles in the financial district; his delivery truck was one of the many vehicles she ticketed daily. She now lives in Southeastern Massachusetts with her husband and three sons. (2006, paperback, 312 pages) Availability: Usually ships in 2-3 business days.
×