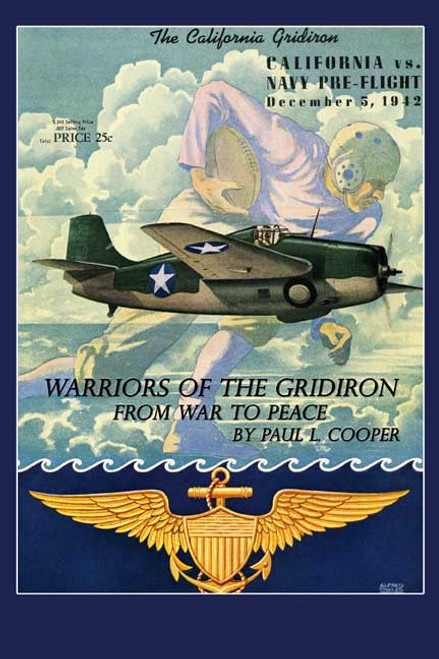 by Paul L. Cooper Warriors of the Gridiron: From War to Peace is a chronicle of the shift of athletic heroes from college to military during World War II on the West Coast. Military uniforms, programs, and activities become part of normal life. The popularity of military football spawns a new set of heroes affecting wartime morale. Period football game programs record military team competition in San Francisco Bay Area stadiums. An athletic trainer introduces the author to wartime Navy athletics. This exposure sparked a lifelong interest in athletic collectibles and military history. The progression of many military participants to professional careers in athletics and other professions are cited. The impact of wartime competition upon immediate postwar professional football growth is explored. ABOUT THE AUTHOR Born and raised in Berkeley, California, Paul L. Cooper attended local public and private schools. Called to active naval service in 1950, he served as an enlisted man aboard the U.S. Navy aircraft carrier Princeton (CV-37) during the Korean War. Following release from service, he received a bachelor of arts degree from the University of California at Berkeley, majoring in labor and industrial relations. He also received an associate of arts degree in journalism from the City College of San Francisco and a certificate in industrial relations from the University of California Extension. Following graduation, he was employed as an industrial relations and personnel professional with International Harvester Company for seven years. He later joined Hexcel Corporation as personnel administrator. In 1967, he moved into the public sector, joining the newly formed San Francisco Bay Area Rapid Transit District (BART). He retired as manager of Management Systems and Research in 1992 after twenty-five years of service. Cooper and his wife, Marie, have resided in Pleasant Hill, California, since 1962, raising five children. Participating actively in community affairs, he was first elected to the Pleasant Hill City Council in 1978 and was subsequently reelected to four additional four-year terms. He was selected five times to serve as mayor, the first do to so in the citys history. He also served more than fourteen years on the nine-county San Francisco Bay Area Air Quality Management District Board of Directors and was Chair of the Board. He has written magazine articles on public administration and military subjects. In 1996, his first book, Weekend Warriors, a nonfiction account of naval reservists called to action during the Korean War, was published. Now retired from local government activities, he regularly writes a freelance newspaper opinion column published in community sections of the Contra Costa Times (CA), a MediaNews publication. (2006, paperback, 334 pages) Availability: Usually ships in 2-3 business days.
×