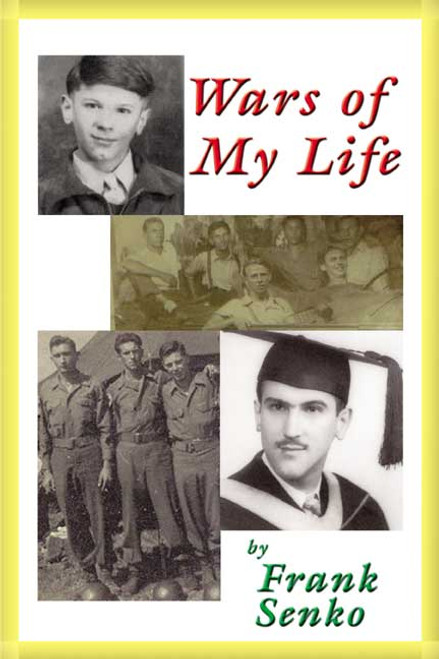 by Frank P. Senko Wars of My Life is the three-section first volume of Frank P. Senkos autobiography. The first generation American-born of Ukrainian immigrants, he begins with the family turbulence of his youth, the gas light, the outhouse, the dirt roads, the horse-drawn-wagon merchants, and the impoverished rough-and-tumble life in his Slavic-American community. Franks mother ran off frequently, leaving the children to fend for themselves and prompting her husband to divorce her. Yet Frank graduated in the top 10 percent of his high-school class. World War II breaks out; out of patriotism, Frank enlists. Once in the European Theater of Operations, Frank was ordered to turn in his weapons and, after a half an hour of instruction, became a battlefield medic for the 3rd Rifle Platoon, C Company, 1st Battalion, 328th Infantry Regiment, Yankee Division. At wars end in May 1945, they were about twenty miles west of the Russian Front. After serving in the Occupation Army in Austria, Frank returned to the States to earn bachelors and masters degrees in electrical engineering. But along the way, he had to deal with postwar stress and confusion while attending college, raising a family, and coping with job relocations. The Wars of My Life is not only Frank P Senkos story, it is the story of America: a nation of immigrants who fought for theirand ourfreedom. It is a past we must never forget if our country is to survive and we are to continue to enjoy the privileges we have. (2005, paperback, 154 pages) Availability: Usually ships in 2-3 business days.
×

Walking Through the Beast