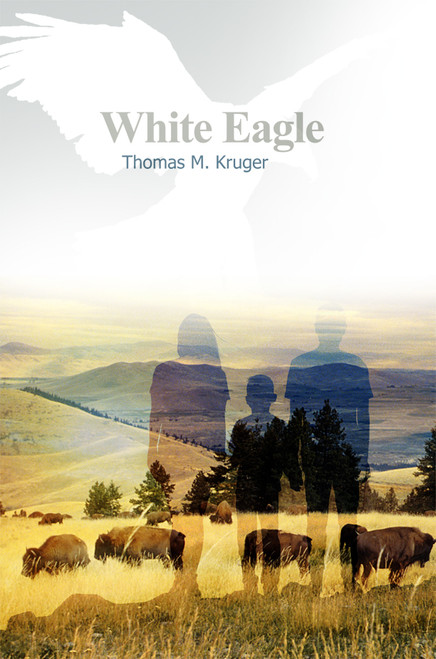 White Eagle follows a family who came into the mountainous region of the Northwest to homestead and start anew in this beautiful but dangerous region of the West. Follow along with a man, his wife, and their ten-year-old boy. As tragedy happens and a boy being left alone to fend on his own, he takes to the woods and learns to survive in this beautiful but savage land.

Lakes and rivers, forests and mountains, all of Gods beautiful creations are spread out before him. The boy goes on to meet a lot of characters along the way. He befriends a wolf that he found in some trappers trap and nurses it back to health. He saves a large Indian who is being mauled by a grizzly bear. He encounters Indian wars and mountain men, twin Indian maidens, and Indians both good and bad. This is a beautiful country beyond imagination, where the buffalo roam as far as the eye could, see and adventures happen one after the other. You will be left craving even more.

Thomas M. Kruger was born in Peirceton, Indiana in the year of 1937. Right after he was born, the family moved to Seymour, Indiana, and he lived there for the first ten years of his life. Then, in 1947, they moved to North Webster, Indiana. Krugers dad bought four and a half acres on the east side of Webster Lake. The authors granddad lived just down the road and, every year, his parents would bring the family to his granddads home for a two week vacation.

Moving back to this area was a dream come true for this ten-year-old boy. It was a paradise filled with adventure. He hunted Indian arrow heads in the freshly plowed fields, he had rabbit dogs and bird dogs, and he became a hunter to help put meat on the table. He trapped muskrats to make money to buy shells. He liked to fish, especially fly fish.