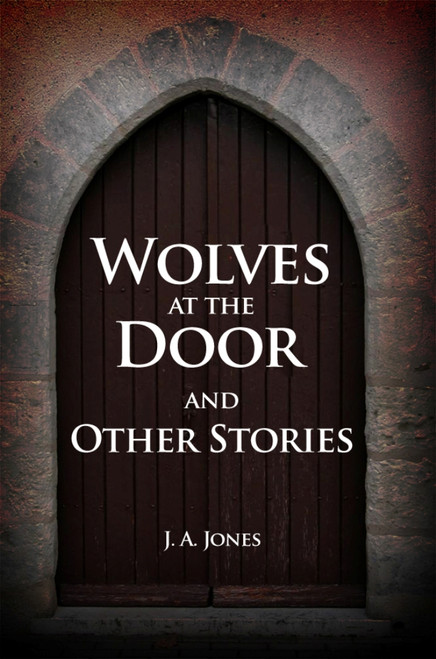 Wolves at the Door and Other Stories
by J. A. Jones

In the story Wolves at the Door Your preacher has been convicted of murder and other felonies earlier in his life and is now working on his fifth wife. This is the situation facing the congregation of one Robert Shackelford who has left a trail of wrecked churches and lives across the United States. We see him in and out of jail, we see his children and wives as they cope with his antisocial personality. His congregation has to choose whether to keep him or show him the door.

In the story Bachs Chaconne A tale of a man who in middle life decides to play the violin and one of Bachs most demanding scores, while his wife has other ideas. She pursues the violin teacher and decides to murder her but the wifes plan backfires.

In the story Michael and Penelope Flashback to the 1960s and see two people in love whose lives are destroyed by drugs and sex; everything about them is intense and it is the intensity that draws them together and apart.

In the story Weatherman A retired teacher falls into a deep sleep and imagines himself locked away for an armed robbery he didnt commit. The various dream sequences are their own mini stories. The main character, Kincaid, remains rooted in his absolute certainty that he could not possibly have any connection with the crime.

In the story A Likely Story A man named Sam attempts suicide, recovers and finds a new life with a new woman, only to lose it on an adventure he couldnt resist.

In the story Ennui A mans boredom leads him to witness crimes that keep him moving from coast to coast for fear of being eliminated. Since the title is Ennui, the reader must consider the extent to which the whole story is a fiction made up by Jackson as a desperate response to his utter boredom.

J. A. Jones grew up in Southern California and attended the University of California (Los Angeles and Santa Cruz) where he concentrated in literary studies and wrote both poetry and short stories. In addition to Wolves, he is also the author of Heat and What We Love.

Women in the Mirror

Wondering Aloud through Your Eyes

Words In The Night