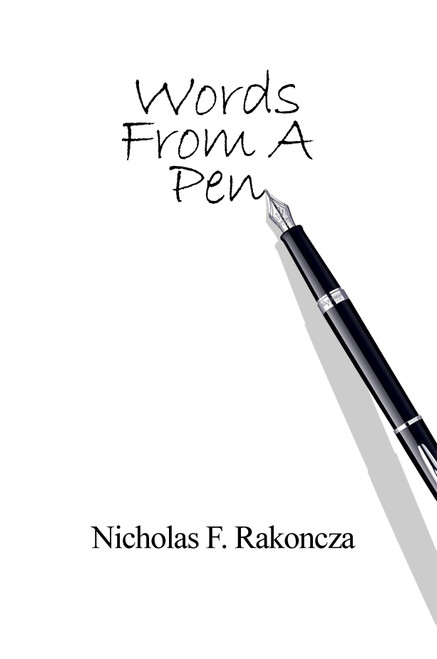 Words From A Pen

Words From A Pen is a collection of poems of no specific genre. They are a collection of events in the author’s life, fanciful creations often nature related, three related to the military veteran, a few just plain nonsense, and some philosophically/mystically related poems that are factual, but not easily provable or explained. All poems were written in the last two years except for “Laugh Clown, Laugh,” which was written in 1944 shortly after the Hartford, Connecticut, circus fire.

Nicholas F. Rakoncza was born in Brooklyn, New York, but raised in New Jersey. After a stint in the United States Navy during the Korean “Police Action” from 1950 to 1954, Rakoncza was employed as a chemical research and development technician for about 15 years, and then as a computer applications programmer and analyst for about 25 years. He was married to the girl across the street for 63 years, became a member of the Masonic Fraternity, and, after retiring, he volunteered at the Ocean County Historical Society in Toms River, New Jersey. Later in life he became a docent at the Navy Lakehurst Historical Society located on the Navy section of the MDL Joint Base in New Jersey.

Rakoncza’s accomplishments include having his name on four chemical research patents and privately publishing three books: Toms River was in Flames (documented account of a Loyalist attack during the American Revolution), The Oliver Cromwell Giberson Letters (his letters home and related history during the Civil War), and the award-winning When Cranberries Were King in Ocean County, New Jersey (a comprehensive look at the cranberry industry in Ocean County, New Jersey).

Attending two writer’s social groups has created Rakoncza’s interest in poetry and this book is the result.

Wondering Aloud through Your Eyes

Words to Be Read