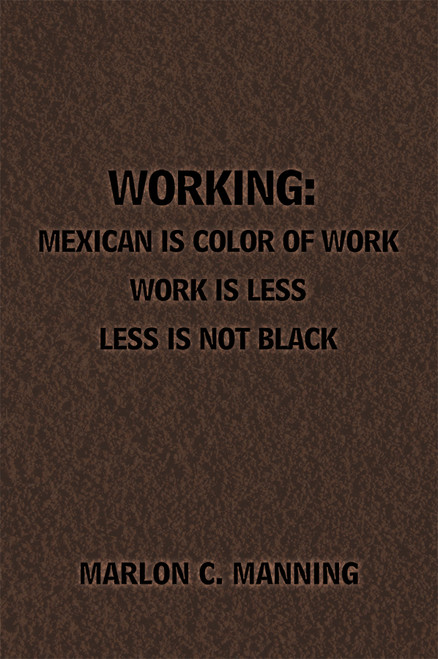 Working: Mexican Is Color of Work Work is Less Less Is Not Black
by Marlon Manning

This book presents empirical observation analysis of a spawning civilization in the United States, which seems to be ethnic in its designation. A growing populous seeks recognition by utilizing organized social interaction. Moreover, these people or groups, have the ability to change the base structure of accepted norms in our civilization through their social organization. This has an effect on many people in our civilization and our ability as people to be unified to work together to continue to build America.

This book is a study of sociology, the culture of ethnic social organization, and working social organization. It is a documented account which presents new information for people and social scientists to analyze. It explores the existing working culture, the changes to our civilization which is influenced by people or organized groups, from the perspective of a man with a working theme within the civilization.

Marlon C. Manning received a social sciences bachelors degree in American Studies from the University of California Berkeley College of Arts and Science. He currently attends Grand Canyon University where he will graduate in May 2015 from a cross-categorical K-12 Special Education Master of Education Teacher Licensure Program.

Manning is the writer of the published book A Student Guide To Practical Modern Macroeconomy. He worked as a middle school remedial reading teacher at Frick in Oakland. He is the programs director for Shepherding International Non-profit Organization. For the last five years, Manning has volunteered for refugees from Sudan, Africa who have come to the United States for leadership development.

Professor Cornel West along with many other people, are part of the authors vision for writing Working: Mexican Is Color Of Work Work Is Less Less Is Not Black.